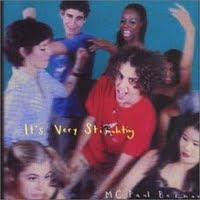 When I started reading the stories in the music rags in 2000 about a Jewish kid from Brown University who had done a rap song for his thesis, hooked up with Prince Paul, and was set to drop his debut EP any minute, I was just waiting for the damn thing to come out. I was so curious about what this dude was going to sound like, what in the heck swayed Prince Paul to hook up with him, and just who the fuck he thought he was. As soon as I saw this EP, I snatched it up.

Turned out, he was something that nobody knew how to properly describe. Music critics were hoping for a new Prince Paul progeny, and got a nerdy kid who stacked rhymes on top of rhymes, always kept it smart, and sometimes got crass just for the fuck of it. Now, Paul Barman's not for everybody, but I can safely say he's for dudes like me. He doesn't take himself or his subject matter too seriously, but he takes language very seriously. His rhymes are intricate, precise, and a goddamn mouthful.

Either you get it or you don't. And I respect that. But those who poo-poo hip hop just because it's not deadly serious are the people who I can't have conversations with. But I'd love to have a conversation with Paul Barman. Because he's pro-wordplay, anti-idiocy, and he loves all the good stuff about hip hop. I can get with that.

And the fact that Princess Superstar shows up on "MTV Get off the Air Pt. 2" on this disc doesn't hurt a bit.

"The Joy of Your World"
Posted by Wockenfuss at 1:48 AM