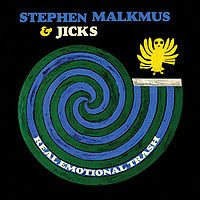 I knew Malkmus was moving towards longer, epic-guitar-jammy compositions, but I never thought they'd reach this level of epic-ness. And I really never thought I'd like it so much.

This is currently my favorite Stephen Malkmus solo release, and I would normally say that could be because it's the most recent. But I've played this thing into the ground, so it's not like I haven't given myself the opportunity to get sick of it. And gotten sick of it I haven't. In fact, I think I like it just as much as I did last year when it came out. So far, this is Malk's crowning achievement, a certifiably huge record that should drag in spots, but doesn't. Instead, it moves swiftly from song to song, varying the length of the tunes nicely and, best of all, being more nonsensical lyrically than any of his other work, which is an accomplishment unto itself.

This is, like a lot of his other records, one that seems to either click with people or turn them running in the other direction. The title track is a solid ten minutes long, but might be my favorite track on the album. I could also see it being viewed as excessive, but given the method with which the song is crafted, I think that's a lazy dig at the running time and nothing else. The song moves with agility, never getting lazy or wanking off for the sake of self-indulgence. The same can be said for this record as a whole. If you're willing to write it off as spaced-out jams, I just don't think you're listening hard enough. There's so much more to it.

Of course, along with the five-to-six-minute sprawlers, there's also the signature three-minute catchy-as-hell rockers that intersperse and add a lot to the album as a whole. "Cold Son,""Gardenia," and "We Can't Help You" are proof positive that Malkmus can still write genuinely weird and wonderful pop songs, no matter how odd and abstract they sometimes get.

I could go on for days about this record. It's easily one of my favorite albums that's been released in the last five years, and at a time when I'm not super excited about new releases current groups, it gives me hope. And already has me looking forward to his next one.

"Gardenia"
Posted by Wockenfuss at 1:18 AM