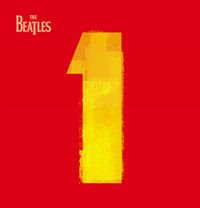 I spotted this used for five bucks about a year ago and bought it on a whim, filed it away, and I'm not certain, but I think as I'm listening to it now, that this may be the second time I've played it. Maybe the third.

Like any good Beatles collection, the songs are sequenced in chronological order, but this one makes for a different journey through the career of the band, as it focuses solely on the singles that reached number one. The thing that most folks find interesting about this collection is what made the cut and what didn't. But really, most of the songs you would expect to see here are here, and possibly a few that you might not expect. I wouldn't have thought "The Ballad of John and Yoko" was a number one hit, but that shows what I know, because it was. So it turns out I'm an idiot.

While we've heard all of the songs plenty of times, the accompanying booklet is full of tons of great shots of 7" sleeves from various countries, offering a look at some really rare records and also the ways in which the band was portrayed around the world. Not bad.

And it's guaranteed that your aunt owns this and loves it.