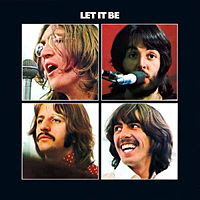 This album is an odd one, at once seeming like a strange afterthought, and yet also a somewhat solemn, appropriate send off to the Beatles. It has always reminded me of Led Zeppelin's Coda, in that it's not a tremendous album, yet it's very good, but it simply exudes an overwhelming sadness that makes it hard to really embrace. Maybe it's just me. Or maybe it's that Phil Spector managed to make this album sound nothing like any other Beatles record.

Either way, this has never been one of the Beatles albums that I've listened to over and over. But, like I said, it's very good. The story behind this record is too long and too well-known to be retold here, so I'll skip that part. But needless to say, the band was at odds, and it comes across clearer here than on any of the other records of their late career. Harrison's "I Me Mine" might not be directly about the infighting amongst the band, but come on. McCartney and Lennon just sound distant, even on the songs they're singing on together. Their songwriting is clearly headed in different directions, but as far apart as they sound, the songs still fit back-to-back well enough.

McCartney really shines on this one, and I've always forgiven him for the corniness and sap of "Two of Us" and the title track (aren't I nice?). Seeing those pictures of him sitting in the studio with Lennon and Yoko on the same chair...it's amazing he wasn't ripping his hair out. I'll allow the man some introspection. "Let It Be" is really a brilliant song, and it's effectively heart-rending if you're in the right (or wrong) mood. Conversely, I've always been a sucker for "Get Back" and all the jollies it spews forth. It's a great way to end the record: on a fun, high note.

Now I'm being sappy. Forgive me.

Oh, and Phil Spector's production is ass. I'll leave it at that.