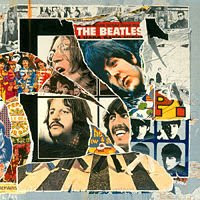 This is the sole Anthology purchase I made upon the actual release of the trilogy, although I think my girlfriend at the time had a double cassette copy of 2 (which you'll notice is conspicuously absent from my collection; the usual excuses apply), so I did listen to that one a bit as well when it came out. I still prefer the later stuff to the earlier work, but at the time, I was really into Abbey Road, so I was anxious as all get out to hear this collection.

It did not, and does not, disappoint. The majority of the tracks are demo recordings in various stages of completion, and the sound quality is really fantastic on most of them. The fascinating aspect (for me, at least) of a compilation like this is being able to, by comparing the early takes of songs to the finished album tracks, concretely establish the amount of work that goes into fully flushing out tunes that start, as all songs do, as rough concepts. It also, though I'm not sure how intentionally, adds a soberingly human aspect to songwriters whom many of us have placed on the highest pedestal. That may come at the expense of shattering some people's fabled notions of the group's songwriting process (although I doubt it), but being able to hear the origins of some of the most well-known songs in rock history is more likely to fulfill many a Beatles nerd's secret fantasies.

I'm not even a full-fledged Beatles nerd and I still get really excited about these early versions. Part of it, for me, is the voyeuristic, fly on the wall sensations that the recording inevitably conjures. When you hear Lennon working "Yoko Ono" into an acoustic home recording of an early version of "Happiness Is A Warm Gun," it not only adds perspective as to his mind's focus at the time, but it gives you the feeling that you're privy to something that may have been initially intended to remain private, both musically and personally. Plus, hearing Lennon say "Shit, wrong chord" when he fucks up the beginning of the song adds a level a candor that proves things weren't always bitingly tense during this era.

All the songs you would hope to hear here make an appearance, though it's possible that I'm mindlessly overlooking a glaring omission. There's also plenty of studio chatter to keep things both light and awkward. Hearing Lennon announce that Yoko's divorce is finally official doesn't exactly elicit screams of elation from his bandmates. But hearing the guys jabber with each other is endearing at certain points, strangely uncomfortable in others. Either way, it's interesting.

There's too many good songs to list here, but perhaps some personal favorites: Lennon does an alternate version of "Cry Baby Cry" that manages to focus on his voice in the best possible way, affecting tones that are both eerie and lush. Have I mentioned how much I like that song? Probably repeatedly. His very early, wildly acoustic take of "Polythene Pam" is great as well. Short and sweet. Paul's early versions of "Blackbird" and "Hey Jude" offer some great takes on a few of the Beatles songs that many of us have perhaps heard a few too many times, and Harrison's early acoustic demo of "While My Guitar Gently Weeps" is a solid reminder that a great song is a great song, even when it's stripped down to the bare essentials.