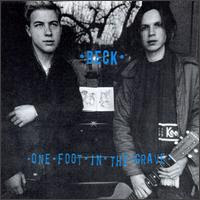 1994 was a big year for Beck. This ended up being his third release, a collection of (mostly) folk songs recorded in Calvin Johnson's basement with a bunch of dudes who would end up being NW rock semi-legends (Scott Plouf is everywhere, you just don't know it). That's part of why I love this record so much. It's Beck's link to the Northwest, and plus, I just find it really odd and cool that he put out an album on K records.

This one's decidedly more mellow than Stereopathetic and way less polished than Mellow Gold, with a lot of the songs not being a whole lot more than Beck, his guitar, and some rattly percussion. Aside from "Burnt Orange Peel," which throws some distortion and speed in for a minute and a half, the record maintains a fairly subdued and morose mood throughout. Considering that it was recorded during the winter in an Olympia basement, that makes perfect sense. It sounds cold and wet.

"Asshole" seemed to be the lone track on this album that Beck played live in the years that followed his initial success, but I could be wrong about that. I know a lot of these weren't popping up on his post-Odelay setlists, though. It's a shame, because there's some great material here.

A few of my favorite tracks are, oddly enough, the ones that feature Calvin Johnson on backup vocals. He's not my favorite singer, but when mixed with the comparative cleanliness of Beck's vocals, it really fills the sound out. "I Get Lonesome" is sparse instrumentally, but the vocals expand it, with Calvin's voice making sure the bottom end is taken care of. But the real gem is the last track, "Atmospheric Conditions." This one's almost more of a duet, with Beck and Calvin's vocals mixing with twangy distorted guitar, clacky drums, and some odd slide something or other. And the lyrics, at least the ones I can understand, are great.

A lot of folks really cling to this early Beck stuff, and as I get older, I feel like I am becoming one of them. Part of it's the time period and the memories I associate with it, but I think it also has to do with the lo-fi simplicity that he used to embrace and has since given up on. I listen to tracks like "Painted Eyelids" and realized I could use some more shit like that on my shelf.