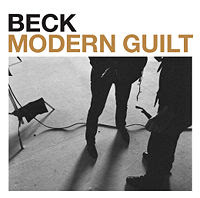 Maybe even Beck felt The Information was a tad lengthy. Here we find him going in the exact opposite direction, crafting a ten song record that clocks in at just above a half hour and, by benefit of being devoid of any fluff or filler, flies by.

When "Chemtrails," the third track on Modern Guilt, showed up on the web about a month before this came out, I wasn't too excited about it. I wasn't planning on it, though. I'm not a huge fan of Danger Mouse (for no real good reason), and when I heard he was handling most of the production for this one, I made note of my preformed hesitance. So, when "Chemtrails" ended up being a bit ethereal for my tastes, I was mentally preparing to pooh-pooh the whole affair. But I was still going to buy the shit out of it.

And buy the shit out of it I did. Maybe it was my unsubstantiated yet fully formed preconceived notions spilling forth, but on the first few spins through, nothing caught me. I let it sit for a night. The next morning I was playing side one while scrambling some eggs, and it caught me. I listened to side two on the way to work (seriously, the album is this short) and realized it was all sinking in: this is a damn fine slab o' wax.

It's as grown up as Beck has ever been, but that's not saying much. And it doesn't matter anyway. The songs are there. They don't jump out at you like a lot of his other stuff (aside from the instantly catchy "Gamma Ray"), but that's what makes the tracks even more solid and speaks to some surefire staying power. "Chemtrails" is a better song than I initially assessed, but it's still probably my least favorite. The opening track "Orphans" features Cat Power on the chorus (she's on "Walls," too), but just barely. And this subtle approach carries over into a lot of the aspects of DM's production. The songs initially sound really simple, but when you give it a good headphone listen there's plenty of little things that jump out.

This record is still really brand new at this point, so I'm curious to see how kind the years will be to it. Will this be a detour, or is this the new Beck? I'd guess detour, but either way, he hasn't got me worried yet.