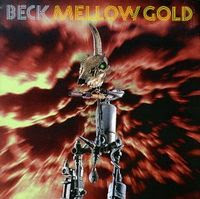 If any song ever reeked of one-hit wonder from the get-go, it was Beck's "Loser."

In the early to mid-90's, my brother and I religiously watched "Bohemia Afterdark," a local video showcase that featured, strangely enough, indie rock and hip hop. A lot of people didn't care for that format, but it was perfect for us. It aired late at night, so we would tape it and watch it on Sunday mornings. Plus, we liked to have the videos on VHS so we could watch the shit out of them. Anywho, this was where I first heard/saw "Loser," and subsequently, Beck.

The song was instantly infectious, something that I'm sure we rewound right after the first time we watched it. It was too good. I hoped it would stay underground so I could latch onto it and make it my own (this was really what the 90's were all about), but I think I heard it at a party the next weekend. I wasn't surprised. It was blatantly anthemic, a song that appealed to those who wanted to embrace its irony and those who didn't care to dissect it at all. I was sadly in both camps, depending on how many beers I had ingested at the parties where it was blared on a loop.

So, like I said, the fact that the song caught on with our proudly disenchanted generation was no surprise. The surprise was that tracks 2-12 on the record were just as good, if not better, than the ubiquitous single. "Loser" had some stamina, but we played it too much. Everyone played it too much. Skipping past it at the start of the record ended up being a sweet move, opening up a wholly unexpected Beck who was just as effective with an acoustic guitar as he was with his bozo nightmare raps. I can still listen to "Pay No Mind (Snoozer)" and enjoy the eff out of it. How he pulled off the "giant dildo crushing the sun" line is still a mystery to me. Really, that should have ruined it. But, alas, it only made it better.

This is not to say that the record turns into a folk fest after "Loser" fades out. "Beercan," the second single from the record, fuses many of the same elements as the first hit, and probably led to even more people thinking of Beck as a one-trick pony. But, its pop jangles are sandwiched between the almost grating distortion of "Sweet Sunshine" and the jarring elegance of "Steal My Body Home," a song that, to me, stands as one of Beck's finest, especially amongst his earliest output.

And, it always kills the dance party, which is never a bad thing.