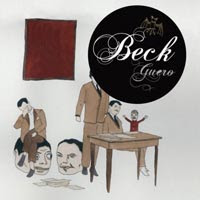 This time around, the word on the street (pre-Beck release) was that Beck and the Dust Brothers were teaming up again. That's right, the winning team that brought us Odelay were getting the ol' band back together, so to speak. We were excited. We knew it wouldn't be anything short of brilliant, that it was going to be the kick in the ass the music world needed, that Beck would ride in on his horse and show us all, once again, just how the fuck this whole thing was done. We expected a lot. We expected too much.

This is only part of why Guero is disappointing, but it's worth mentioning. I had actually said things like "Man, I hope he and the Dust Brothers do another record" or, sheepishly, "Man, I don't get just, like, you know, when something works, why not just keep doing it again?" So, yes, I was looking forward to it. Too much, like I said. The early reviews were good, but not great. It ended up being pretty much the same deal with the record.

There is a point in a lot of artists' careers when you get the distinct vibe that they are doing (and whether this is intentional or not, we'll never know) impressions of themselves. Like they're trying, and not in a blatant and obvious way, to recapture something that's not there to capture. Beck never really fully treaded into this territory, but he came closer than he ever should have on Guero. And you could argue it's almost like he was trying to recreate individual songs. "E-Pro" is "Devil's Haircut." "Broken Drum" is "Steal My Body Home." "Go It Alone" is "Derelict." And "Rental Car" is somehow "Black Tambourine" which is somehow "E-Pro."

I'm simplifying and exaggerating this entirely too much, but you see what I'm saying. We got the old Beck back. But it seemed like he was going through the motions. The lyrics, while witty at times, were lackluster overall. And even the Dust Brothers seemed like they hadn't dug nearly as deep into the crates for what we thought would be a endless abyss of unidentifiable samples. I swear they sample and distort the opening guitar lick from "American Woman" on "Black Tambourine." Weak.

The shining moment in this uneven record is "Girl," a supremely catchy and single-worthy track that shows us Beck's still got it. And he does. I may sound like I hate this record, but I don't. Far from it. It may not be my favorite, but I think it's just me. I built it up in my head, getting a pedestal ready for it before it even had a release date. What can I say, I'm easily excitable.