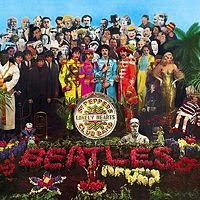 Man, The Beatles really cranked 'em out. Sgt. Pepper's was released less than a year after Revolver, and while they're not a completely different band, any remnants of the Revolver-esque two minute pop ditties are hard to come by this time around.

If anyone tells you this is a "concept record," they don't know what they're talking about. While the title track leads us to believe that's what's in store, especially when it bleeds into "A Little Help From My Friends" after the intriguing introduction of Billy Shears, it ends right there. Sure, there's the reprise at the end, but it's mostly pointless because it doesn't tie anything specific together. Aside from those odd bookends, this is essentially just like any other Beatles record, though it has always held the distinction of being ostensibly more extravagant.

But, I'm not going to hop on my soapbox and tell you that Sgt. Pepper's is overrated. Far from it. It's a brilliant record, I've just never been completely convinced that it's the Beatles' best. But, like I said in a previous post, arguing about the rankings of Beatles albums is, while fun, an impossible conversation to end with both parties satisfied they've made their point. This is one of the great things about the Beatles. Some of these albums are very dear to people, for any number of (usually deeply personal) reasons. And, everyone has their favorite. Take me, for example. I think this is a fantastic record. But if I ranked my favorite (or what I thought were the best) Beatles LPs, this wouldn't be at the top of my list.

Part of it may stem from the fact that "Lucy In The Sky With Diamonds" is one of my least favorite Beatles tracks. It personifies the one thing I don't like about the Lennon of the late 60's: his nonsensical psychedelic tendencies, thinly veiled as deep lyricism. It works in "I Am The Walrus" (which would show up later that same year) because the song itself is just undeniably infectious, but "Lucy" doesn't break through in the same way for me. I'm possibly missing the point, but if I haven't gotten it yet, I don't think I'm going to.

I think there are a number of reasons why this album resonates with so many people, but one of the most obvious has to be "A Day In The Life." I have to admit, it's a great reason to love this record. If you had to pick a track that summed up the group, there would be a lot of push for it to be this one. Lennon rarely sounds as beautifully eerie, and Paul's jaunt breaks the song open and mends it together all at once. The juxtaposition shouldn't work, but it does. And placing it at the end of the record? It wouldn't have worked the same way if it were anywhere else.

But, you knew all of this already.

Now I'm going to try and figure out why my LP has a Capitol sleeve and an Apple label...

I know this is sacrilegious, but I have never really harbored a great fondness for this album. Honestly, I would say it is my second least favorite (after "Let It Be") of their studio albums. I know, right. I'm the bad guy. But to me, by comparison with their other songs/albums, this one just doesn't hold up. "Lucy In The Sky With Diamonds," "She's Leaving Home," "Good Morning Good Morning," and "Within You Without You" are all sub-par Beatles tracks, in my book anyways. Shoot, just "Within You Without You" alone drops this thing way down in my book. Whenever I see this as listed as #1 of all-time I have to wonder if people remember that that song, all 5 painful minutes of it, is placed directly in the middle. Mind boggling. The "Sgt Pepper" bookends and "Day In The Life" tend to make people lose their minds and forget about some of the stuff in the middle. Like I said, this is strictly comparing the Beatles against themselves.