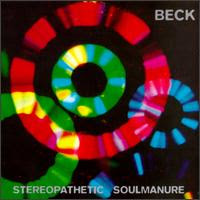 Beck's early career is a lo-fi mess of haphazard singles, independent releases, and a major label debut that was way better than anyone figured it would be. It starts here, with a collection that (probably unintentionally) makes a great introduction to the man and his music. All the trademarks of 90's Beck are here: the spastic noise, the acoustic dark folk strummers, and the simple but quirky tunes that were destined to end up on mix tapes everywhere.

So, needless to say, this one is all over the place. While "Puttin It Down" sounds like it was recorded on a boombox, "Crystal Clear (Beer)" and a handful of other tracks seem to have been treated to some semi-professional production techniques. It doesn't take long to figure out that while young Beck might not be the most proficient guitar player, he more than makes up for it with the melodies and lyrics. While the words may be nonsensical, they sure do sound great within the song, and this was really his early strength. That, and trying really hard to emulate the diction and abrasive nature of an old blues man. It's clear he knows he's not pulling it off, but his vocals on songs like "Rowboat" are still effectively eerie without verging on being unintentionally sarcastic.

"Satan Gave Me A Taco" is one of the aforementioned quirky ones, a loose and quick narrative folk jam that barely stops to let you process what's going on. It's fun, but oddly enough doesn't have the same staying power as some of the noisier jams like "Rollins Power Sauce" and "Tasergun." But that could just be me; I listened to that song a little too much in the late 90's. And, if those aren't noisy enough for you, the album has a sweet bonus track of about 15 minutes worth of noise at the end. Not sure if I've ever made it through that extravaganza.

It's really impossible to see where he's headed if you're just talking about this collection of songs, but given access to his slightly later work, it makes perfect sense. "Cut 1/2 Blues" sounds like any of the b-sides from his next albums, and if given a substantial polish job, could've been cutesy instead of clamoring. He was figuring out the formula, and he was almost there.

Not that he needed to hurry, because this one stands alone as a great record.

"Waitin' For A Train"