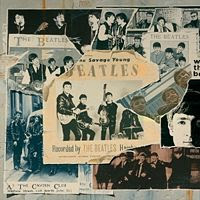 This is another one of my recent Beatles purchases.

First off, let me say that all in all, I think the Anthology trilogy is really a worthy addition to the Beatles catalog. They unearthed some undeniably rare shit for these collections. They probably aren't for the casual fan, but I think folks who are even relatively curious about behind-the-scenes history of the band can find some intriguing stuff here. And for those who choose to nerd out, the liner notes are extensive enough to get your geek wheels turnin'.

This record is arranged chronologically (thankfully), but before we're treated to the insanely early Quarrymen stuff, there's "Free As A Bird," arguably one of the most talked about and anticipated tracks ever. At first it seemed like it might be a lost Beatles song, but we (people in 1995 who were excited about this release) came to find out that the song began as a solo Lennon demo that was recorded some years after he left the Beatles. The surviving Beatles laid down some stuff on top of it, and there you go. It seemed like a strange thing at the time, and it still feels really out of place listening to it now. It's a fine song, but the original recording made by Lennon just wasn't that good to begin with. I don't know. People seem to have differing opinions about the song. I could take or leave it. I'm not enough of a purist to make a stink about it one way or the other.

I thought the video was pretty sweet, though. I can say that for sure. For 1995 that was some impressive work. Still looks pretty good, and there's lots of little references to catch along the way.

The rest of the record takes us from the very beginning of the group all the way up to "Eight Days A Week." The tracks are interspersed with interview snippets, making it clear that this is a companion to the movie that was being shown on PBS around the same time as this release. I could do without the talking, because while they may be talking about the correlating time period on the record, a lot of the sound bites are from years later, and in my mind, sort of fuck up the chronology of the whole thing. I could be way off. But it bugs me.

Aside from some mildly tedious and trying moments (two different versions of "Eight Days A Week" in a row is a bit much), this record does a fine job of adding even more insight into the origins of the world's most well-known band.

And finally, Pete Best and Stu Sutcliffe get to cash some royalty checks.

"In Spite of All the Danger"