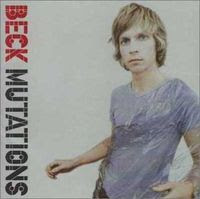 When word started making the rounds that Beck was releasing his follow-up to Odelay, the news was generally received with ecstatic glee, which was quickly quelled by an odd disclaimer: this was not to be the actual follow-up LP, instead it was more of a collection of relatively hasty recordings meant to tide us over until Beck could release a polished and proper full-length. So, we didn't expect much, but we were excited nonetheless. (and when I say "we," I think I mean "me.")

Whether intentional or not, these slightly lowered expectations made Mutations sound even better upon first listen, not that it needed any help. This is a great record, one that was only considered less than an actual Beck album before everyone heard it. People still consider it some sort of intentionally mellow sidestep that allowed Beck to purge some jangly joints from his overcrowded head, but the record's not nearly as subdued and skeletal as some folks would have you believe. Yes, the tempo and abrasiveness are toned down in comparison to Odelay, but the songs aren't one-offs that got thrown into a half-assed package in an attempt to strike while Beck's iron was still hot. The tracks are fully realized, layered with clicks and clacks of percussion that add texture and depth to songs that must have been equally stunning when performed by just the man and his acoustic.

This is probably Beck's only album where he peaks early, but "Cold Brains" is too good not to be the opener. I have listened to this song literally hundreds of times, and I may never get sick of it. "We ride disowned/ Corroded to the bone" is, while a bit dramatic when taken out of context, just a fucking perfect refrain for this song, and it adds a potent and stage-setting tone for what follows. I'm speaking generally about the remainder of the record, but what immediately follows is what was considered, at the time (remember this was pre-Sea Change), one of Beck's most sincere and heartfelt ballads, "Nobody's Fault But My Own." It follows in the decaying footsteps of the previous track, still strangely adding imagery focused on death, and not the sarcastic kind we might have expected from him at the time. This was a big step for Beck, and it forced a shift in his listeners as well: we had to really accept the fact that he wanted to be taken seriously.

I didn't have a problem with it. In fact, looking back and knowing what was to follow this, you can put it together and realize it was a brilliant move. We'll get to that...anyway. I guess "Cold Brains" and "Nobody's Fault..." were released as singles, but "Tropicalia" was the only one I remember getting a whole lot of airplay. In true Beck form, it was probably the weakest song on the record, but it was easy to stomach and had a peppier feel than a lot of the other cuts.

And yes, this is one of the albums I own on both LP and CD. I bought the vinyl when it came out, which was a good move. It came with a bonus 7" that has some non-album tracks and a sweet oversized booklet wrapped around it. Not bad. I have no idea where I got the CD.