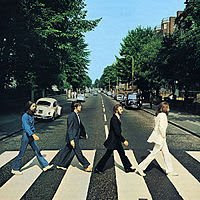 Although Let It Be wouldn't be released until a year later, most folks agree this is the last real Beatles record. That's my take on it too, but that might just be because their career is rendered even more perfect by that distinction. Having the last song on your last record titled "The End"? It doesn't get any better than that. But, wait. Isn't "Her Majesty" really the last song on Abbey Road? A lot of questions surround this record, and it's what makes it, aside from a collection of phenomenal songs, a great discussion piece.

I have, on more than a few occasions, definitively declared this my favorite Beatles record. The Beatles (The White Album) remains an extremely close second, but in the end (hey!), I always come back to Abbey Road. It's the Beatles' crowning glory, proof that, when all is said and done, they are the best band ever. Only this group of guys could take relationships that were strained to the brink, put their differences aside in the interest of one last hurrah, and have it end like this.

While we get the expected series of songs that are clear harbingers to the solo careers that were already in the works, the sting of bitterness from the previous record is gone. The boys are back to their bread and butter: optimism and love. As for its genuineness, we'll never know. But it certainly feels real. And on top of that, while this could have easily played out as a series of singles, they instead wrap it up with a medley (I guess they call it a suite), combining half-songs and fractured pieces into one of the best sides of a record ever. It's a big part of what makes this record so fantastic.

Harrison gets two of his best songs across here, the perennial favorite "Something" (his first A-side single), and the timeless "Here Comes The Sun," a perfect song to start the monumental B-side of this LP. Ringo even gets in one last Starkey original, the wonderfully out of place "Octopus's Garden." It's arguably the one weak spot in this whole album, but fuck it, it's Ringo. I'm more of a "Don't Pass Me By" man, but hey, that's personal preference.

The second side of Abbey Road is a thing of legend, a collection of melded ditties that are so interlocked with one another in the minds of even casual fans, that they should never have been allowed to be played on a jukebox as separate songs. Have you ever had "Polythene Pam" come on your iPod when you're running the shuffle function? It's jarring to hear it out of context. That's why, whenever possible, I start with "Here Comes The Sun" and just let the whole side play out. I've been doing it for years, and it has yet to get old.

It never disappoints. And, you get to hear Ringo's drum solo.

This is probably where you are going to get angry with me, but I can't believe that this is your favorite. Don't get me wrong, it's great, but this one just has never fully clicked with me. I agree with you that side 2 is great, but "Come Together" for some reason bores me these days, "Maxwell's Silver Hammer" seems half-assed to me, and don't get me started on the "let's phone it in" vibes of "Oh Darling," "Because," and "Sun King," and the wanky Gregg Allman-esque "She's So Heavy." I don't know, I guess that I am a bad person. It's just that the majority of Side A seems, well, ordinary by their lofty standards. Which is odd because Side B contains some of my favorite stuff of theirs. Ironically, I disagree with you about your one negative comment about the album. "Octupus' Garden" is a great song, much better than "Don't Pass Me By" and much better than the songs I listed above. I guess you hate me now.