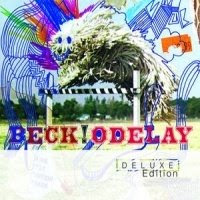 If anyone still needed proof that Beck wasn't a flash in the pan, Odelay was it. It's one of the most important (and best) albums of the 90's, and it couldn't have come at a better time. It was 1996, and post-grunge shit rock bands like Bush and Seven Mary Three were beginning to get way more attention than they ever deserved. Beck got us back on track, giving us a record that was both smart and fun, with dense but breezy beats that effortlessly matched his off-the-cuff lyrical style perfectly.

The record sounded nothing like any of his previous output, and I remember being taken aback at how precise and clear the album was. The grooves were synced, the vocals sounded deliberate, and even the noisy portions were corralled in before they split your ears open. Producers The Dust Brothers must have had a lot to do with this, though I've never been sure exactly how much of this record is them and how much is Beck himself. To me, the music (aside from maybe "Ramshackle") sounds like pure Dust, but who knows. Who cares. I do know that I saw Beck during his tour for this record, and when he played "Novocaine," I decided then and there that it was the greatest song in the history of music (I've since relented a bit on my staunch opinion of it's supreme excellence, but I'm still a big fan).

This is one of those records that really encompassed my life for a good year. "Where It's At" was on the radio (inside the milk cooler I was working in) A LOT that summer, and in the fall it turned to "Devil's Haircut." The funny part was, those were the two weakest songs on the record. Tracks like "Hotwax" and "Readymade" are the reasons this album will remain Beck's crowning glory. They're catchy but coarse, too distorted or twangy to get the radio play, but his vocals and lyrics are just untouchable on 'em. I mentioned "Novocaine." Dear lord. And there's "Jack-Ass." If you can think of a more beautiful song with two chords and the word "ass" in the title, I'm all ears.

I picked up the Deluxe Edition when it was released earlier this year, and I'm not super impressed with it. I already had a bunch of the songs (on singles, I don't cheat with zip files of obscure tracks like the rest of you lazy downloading chump-o's), and the ones I didn't have were cuts like the "Where It's At" UNKLE remix, which is 12 and a half minutes long and unwisely kicks off the second disc of the set. Ballsy. But, if you've never heard "Feather In My Cap," "Strange Invitation," or "Brother," you're missing out on some great '96-era Beck that you need to make a part of your life.

How much do you spend on CDs on a monthly basis, mate?

Can you tell how jealous I am?