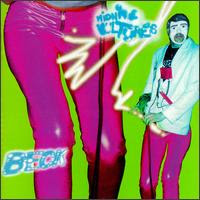 While this record was still being touted by some as the real follow-up to Odelay, enough time had passed that most people couldn't have cared less to size up a new Beck album in such terms. While Mutations was a stellar album, we (as usual, I mean me) had played the shit out of it, milked it for all it was worth, embraced its barrenness, and were ready to feel good again. We wanted the Beck of old to make his triumphant return, to drop some nonsense while (as much as I hate to say it) rocking the party with his unmistakable brand of sophistication. And he did. Oh, he did.

If I lack a bit of enthusiasm for some of Beck's recent output, it's because of records like this. He is capable of taking music and knocking its dick in the dirt, of making a record that on paper sounds like a terrible idea but ends up solidifying his genius. This is the Beck we all want to remember.

So clearly, I'm a fan. When I listen to tracks like "Mixed Bizness," I don't have any problem remembering why. Lines like "She's always cold lamping/ Visine at the canteen" are just ultra dope, sung with a conviction that should assuage anyone's reservations that this might be some sort of derailed Rick James tribute. Need more proof? Listen to "Get Real Paid." Yeah, the one where hes says "Touch my ass if you're qualified." That's a good time, my friends. If you don't think so, I can't help you. But you should probably listen to the Beatles-esque melody of "Broken Train," let it seep in and overtake you, just to make sure you're not a hollow-eyed bore.

The casual fan will refer to this album as "The one with 'Debra' on it," but I implore you, don't be that person. We all listened to that song way too much when this came out, and really, this song is to blame for the misclassification of this album as a jokey dance party parody record. Don't get me wrong, I love the song. But do yourself a favor: if you're planning to put this on at a party, play the preceding track "Pressure Zone" before you get into "Debra." It's an oft-overlooked Beck classic and will (and I still hate to say it) rock the party more than sufficiently.

Then, by all means, sing along with "Debra."

This is the one Beck album I secretly like. It lacks the the pretentious/nonsense feel that his other albums seem to have. And of course this is based solely off have having to listen to all of his albums, up to Sea Change, at the Wherehizzity. "Hollywood Freaks" is the jam.