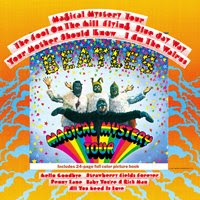 I've often wondered, if I had been a teenage kid in 1967, if I would have approved of the Beatles' quick transition into psychedelic rock. Looking at the collection of photos inside this LP, it's hard to imagine some of the outfits and random scenarios (a pencil-mustached Lennon serving pasta with a shovel?) not coming across as self-indulgent and drug fueled. Not having the luxury of being alive when it was actually happening, these are, instead, images I've grown up seeing and never thought to question.

For the record, it's always seemed cool as shit to me. But, it would be great to get inside the head of a fifteen year old die-hard Beatles fan at the time. In hindsight, we know this was a period when the group was breaking new ground in every way, and, despite the inner turmoil that was beginning within the fold, writing some of their best material. I just can't help but think there were some nervous rumblings the first time Paul hopped into the walrus suit.

Obviously it was well received, and that's no shocker. This album is every bit as good as Sgt. Pepper's. "I Am The Walrus" is one of Lennon's finest moments, a song with delicately pretentious lyrics (that ultimately work, of course) and an indelible melody. On a personal note, the way he pronounces "policeman" as "p'leecemin" has always brought me an unexplainable sense of elation. "Blue Jay Way," Harrison's sole contribution here, is a damn fine one. "The Fool On The Hill" and "Your Mother Should Know" show a slightly more mature side of McCartney, which is fine, because he evens it out with the raucous title track. Actually, McCartney really shines all over this one. "Baby You're A Rich Man," which feels like a Lennon track at first (it was), features a fat dose of Paul on the chorus.

The record wraps up with "All You Need Is Love," a track I sometimes wish I didn't like, but can't help favoring. It's helplessly idealistic and a bit repetitive, but damn, those horns get me. When I was a kid (I think I was about 11), I taped a special on TV about the twentieth anniversary of Rolling Stone magazine. It featured an interview with George Harrison, where he recounted a story where someone asked him if he still believed that all you need is love. His answer was "Yes, absolutely." It still impresses me that he hadn't turned out embittered in his older age.

Plus, the footage they showed of Mick Jagger, draped in flowers and hopelessly stoned, singing and effeminately clapping along at the filming of the recording session for the song, is a great source of entertainment for me.

I secretly love this album way more than I should. Even though I know that "Strawberry Fields" and "Penny Lane" were originally a single, the UK version I have includes it as part of the album, sending it into the Beatles stratosphere. I definitely prefer this to "Pepper." There is no filler (well I guess except for "Flying") here, just the last precious moments before they pared things back down and really started hating each other. Here comes Linda and Yoko!