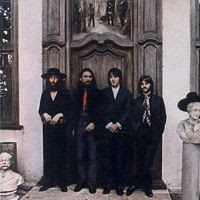 There are three LPs that essentially molded the way I viewed and listened to rock music from an early age. This is the first one. I'll mention the other two when I get to 'em. But this, a compilation of Beatles singles that spans their entire career over two sides of a record, might just be (aside from Elvis) my first real memory of listening to rock and roll.

My mom and dad's record collection wasn't huge, but once you flipped past the Mamas & The Papas and the Kenny Rogers, there was some decent stuff in there. When I was old enough to reach the record player, I started digging through the albums. I still have nightmares about the Sha Na Na record I used to listen to all the time. Apparently I enjoyed doo-wop. Anyway. This was the only Beatles record my parents owned. I remember playing it when I was really young, and when I got a bit older and really grasped what it was, it got spun a lot more.

There were a few things that confused me about this record when I was too young to realize what it was really about. First of all, John Lennon looks, to the eyes of a five year old kid, like anything but a rock musician. He looked to me like a religious man, a priest or whatever Father Guido Sarducci was. I think Lennon's holding his belt in the cover photo, but from a distance I always assumed he was clutching a Bible. This makes no sense, but like I said, I was very young. Lennon also just scared me a bit. He looks pissed to be there (he was, this was the Beatles' last photo session) and didn't really give off the "Can't Buy Me Love" vibe that kicks off the album. This leads to more confusion.

If you're going to put together a compilation record that spans a band's career, you've really got to have a younger picture on there to add some perspective. This isn't the only problem with the cover. The songs are listed on the back, but out of order, so you've got to refer to the label when trying to find the song order. Speaking of the label, it lists the title of the album as The Beatles Again. The spine of the cover lists it as Hey Jude. Clearly the whole thing was thrown together hastily.

But, the songs are great. It's probably because I've listened to this more than any other Beatles record over the years, but some of my favorite songs of theirs are on here: "Rain," "Paperback Writer," "Lady Madonna," "Don't Let Me Down," and of course, "Old Brown Shoe." Oh, Harrison shines on that cut. And the good version of "Revolution" is on here too. I'm not a huge fan of "The Ballad of John and Yoko," but it's a good closing track. I've never really liked "Hey Jude." Seems like it's about three minutes too long.

So yes, this was my introduction to the Beatles. And a damn good one. A quick history lesson on the greatest band of all time. I remember listening to "Paperback Writer" over and over, but I could be making that up. To this day, though, that track sticks out for me as very representative of the Beatles sound.

Although it's not really at all.