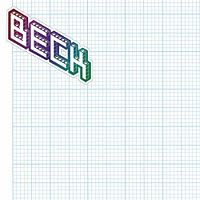 This is a huge album. Beck went all out for this one, attempting to make this record a complete experience, and you have to at least give it up for his ambition. Aside from the blank cover (stickers included!) that encouraged the listener to get involved, the CD came with a DVD that included videos for every song on the record. On top of that, the actual music here can be dense, intricate, and almost exhausting. But it's also really, really good.

I was listening to The Information while I was driving around today, and really feeling like I deserved a kick in the ass for not playing it more in the last year. I bumped the shit out of it when it came out, but it, like many of my records, got lost in the shuffle (literally; damn you iPod!) and it's been stagnant on the shelf for far too long.

I think the whole production of it all turned some folks off to this record (not that it wasn't popular), as it was a lot to take in. I realized today, and I'm a bit embarrassed to admit this, that I'm not as familiar with the last few tracks on this record as I would like to be. This is Beck's longest album, and it feels like it. But, in fairness, most of that is due to the final track, "The Horrible Fanfare/Landslide/Exoskeleton," which clocks in at a trying 10:36. The preceding 14 songs are, in comparison, not nearly as demanding. In fact, there's a heaping handful of appropriately succinct cuts here that stack up with some of Beck's finest work.

After the opener, the slightly lackluster "Elevator Music," we get the one-two punch of "Think I'm In Love" and "Cellphone's Dead," two tracks that sound like they were culled from the ashes of Odelay. It sprawls from there, going out on limbs ("Strange Apparition") and reigning it back in ("Nausea"), all while keeping the vibe peripherally trained on the prize. The approach works, and through some wise sequencing of the songs, it continues to do so for the duration.

Like I said, it's a dense one, and before I start dry-humping Nigel Godrich's production techniques again, I'll take it in this direction: Beck sounds like Beck on this album without trying to sound like the Beck of old. He's loose, but he's focused. The lyrics are back, and the off-kilter drum kicks are back, clunkier than ever, but making complete sense.

My only beef: they released a "deluxe" version of the record like four months after the original came out. After all the hoopla with the initial release, I thought that was pretty weak. Which is why I never bought it. If I remember correctly, it contained a bunch of remixes, and I was pretty remixed out at that point. But I plan, someday, to welcome these remixes into my life.