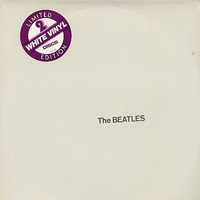 This was my most recent Beatles purchase, so I'm proudly posting the pic on the left, just to make sure you know I have this on white vinyl. Of course, now I still want to get an original copy with a serial number. It's endless...

The first time I heard someone piping up about how this would have made a better single album than the sprawling double LP we have come to know and love, I was a bit stunned. The idea had never even occurred to me. The more I thought about it and discussed it, and the more I listened to the album (it's a college staple, and I had been schooled in its virtues plenty before that), the more I came to realize what an asinine proposal this was. If you were to take a thing away from this LP, it wouldn't be the same.

Say what you want about "Revolution 9," but it's there. It will always be there, that lengthy reminder at the tail end of the second record that reminds us how fucked up this band was becoming. It's almost a shame that the CD generation was able to skip it with a quick press of a button and the mp3 generation probably doesn't even get as far as loading it onto their iPods. Though I'm sure folks in the 60's and 70's got used to moving the needle a few inches toward the inner groove in avoidance, they were without remotes so I bet more of 'em were subjected to it. And make no mistake: "Revolution 9" is a terrible, terrible song. It's an exercise in ego on a scale rarely seen. I just love the idea of it. I really can't believe they actually put that song on a fucking record. No wonder Harrison was quitting the band left and right. He's getting songs shot down, while Lennon is allowed eight minutes to get egregiously masturbatory. It's really something.

But what's really something is how amazing the rest of this record is. If you feel like some of the songs are unfinished, if you don't like the playful feel of some of the lyrics, that's cool. But just know that you're wrong, you don't get it, and you're hopeless. I'm kidding, but honestly, I'm a little suspect of people who don't like this record. It's got something for everyone. I could go on forever (as usual), but there's no need. How about a few of my favorites?

The one-two punch of "Dear Prudence" into "Glass Onion" has always really impressed me. Lennon goes from sincere to dick mode at the drop of a hat. In the end, I think this might be his strongest record. "I'm So Tired" is one for the ages.

"Don't Pass Me By" - Ringo, stepping off the coattails and proving his worth. Like there was any question...

All of Harrison's songs. Bitter and brilliant.

"Helter Skelter." Who would have seen that coming?

I was cracking up at your take on "Revolution No. 9." McCartney claims that he didn't even know it was going to be on the album until after it was pressed, which I think is a lie. I still remember hearing that song for the first time as a youth and marveling at how incredibly long it was. Not only was it awful, it was 8 minutes of awful, which really feels like about 30 minutes of awful when you are listening to it. It is actually the one thing that makes "Revolver" win out over The White Album for my favorite record of theirs. Otherwise, as you said, it is two albums of wonderful, varied perfection. I have also heard the "it should be one album" theory and I want to spit in those people's faces. Aside from "No. 9," what song would they remove? Anyhoo, I can't believe that you left out "Bungalow Bill," one of Lennon's crowning achievements. Also, Harrison really moves into stallion territory on this one. I could go on for days. I thought you had a serial numbered copy of this. What the hey?