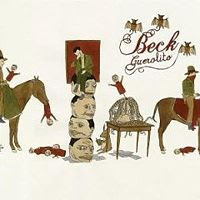 Beck is no stranger to the remix, but up to this point in his career, the reworked joints had been relegated to b-sides and import only tracks. Why he felt the need to release an entire album of 'em for Guero, I'm not sure. It doesn't end up being a bad thing, as the collection succeeds in producing some smooth tracks, benefiting from source material that seems to be tailor-made for being broken down and put back together rather easily.

But is it even really a Beck album? I mean, sure, they're still his songs, but he's not the one doing the adjusting. Whatever, he's left the task in the hands of some ample knob twisters, and like I said, it works out well enough. None of the remixes are half-assed, and some of them are really quite ambitious.

I didn't like the Octet remix of "Girl" the first few times I heard it, but it's grown on me. It's kind of cool to hear the poppiest song on the record broken down to almost an unrecognizable state. Some aren't as gutsy, but the ones that are end up being the most memorable. Adrock's remix of "Black Tambourine" is sparse and vacant, hitting hard with glitchy bass and some video game-ish keys. It's Beastie-esque, but it sounds plenty Beck appropriate as well.

Some put their own stamp on the tracks, with mixed results. The Diplo remix of "Go It Alone" comes off as the laziest of the bunch, and a bit corny. But, it's preceded by what in my opinion is easily the strongest track on the record, El-P's remix of "Scarecrow." The dense and dark drums are unmistakable, hitting with that slightly distorted and cinematic effect that pops up on a lot of his recent work. Hearing the trademark sounds of both artists butting heads and then joining forces is pretty damn cool.

"Clap Hands," a track that was left over from the original session, is thrown on at the end here, and it doesn't end up being completely out of place. It's a bit scatterbrained, and the intentions meld well with the rest of the cuts. Overall, it's a solid companion to an album that felt like it needed another little push. And they kept the songs in the same order, which makes me happy because I appreciate consistency.