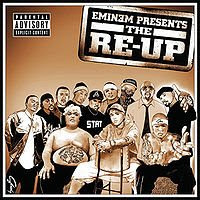 While this is probably better technically categorized as a "Various Artists" album, Eminem's name is the one on it, and I've got it filed with the rest of his albums, so here it is.

This is the Shady Records family doing their version of a mixtape type thing, but calling it that doesn't do justice to the production, which is fully realized. This is a real release, and a damn good one at that. Maybe it's that I wasn't expecting much, but I've really grown to like this record. Or at least most of it. Eminem seemed to tout this as mainly a vehicle to introduce some of his new artists (Cashis, Stat Quo, Bobby Creekwater, etc.), but he's all over it, and so are D12, 50 Cent, and the always reliable Obie Trice.

Eminem produced the majority of the beats himself, and the focus here is mostly on tough talk and streetwise anthems that, while certainly heavy on the hooks, also feature lots of room for the dudes to rap. Eminem turns in some great verses on this, and so do the rest of the guys, for the most part. I'm not a huge fan of his new protégés, but the songs with the familiar names are far from b-side quality throwaways. Eminem's verse on "You Don't Know" is nuts, rattled off so quick it's hard to catch all of it. He follows it with "Jimmy Crack Corn," and while the tempo is a little slower, he delivers again.

If nothing else, there's glimpses of the old don't-give-a-fuck Slim Shady returning, and it's nice to see. The album's closer, "No Apologies," which is probably the most pensive track of the bunch, is Eminem spouting off and angry, and he's once again unconcerned with who doesn't see it his way. It's not bad.

Or maybe I'm just trying to tell myself his next record won't suck.