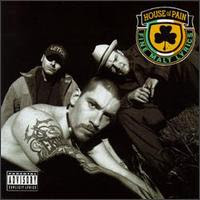 I love House of Pain.

I know they've become a bit of punchline over the years, but these dudes put together some great records in the 90's, and they deserve more credit than they've received. I've never listened to any of Everlast's solo stuff (except for his horrible pre-House of Pain album when he was with Rhyme Syndicate), and I don't care to. He doesn't seem like the same dude to me anymore, which doesn't make much sense, I know, but that's the way it goes. I may check out La Coka Nostra (the new "supergroup" featuring the HOP dudes), but probably not. That bandana over the face shit is retarded. Anyway. We'll always have the original House of Pain albums, and I'm fine with that.

This is their debut, and their best effort. I'll get to why the next two aren't nearly as bad as everyone thinks they are, but for now, let's talk about why this was one of the best hip hop records of the 90's.

When you've got DJ Muggs helping you out with production (and it's the 90's), you know you're set. He and Lethal divided this one up a bit, but it feels like a Muggs record overall. So the beats here are fantastic. There's not a bad song on this record, and the sequencing is spot-on as well. The intro is classic, they get "Jump Around" out of the way early, and then the shit really starts. "Top o' the Morning to Ya" and "House and the Rising Sun" are both more than solid, and "Shamrocks and Shenanigans" should have been as big as "Jump Around."

Though their Irish schtick wears thin pretty quick, they use it to their advantage on "Danny Boy, Danny Boy," one of the best songs on the record, and a rare track where Danny Boy O'Connor gets ample time to do his thing. I always thought it odd that Everlast did the "Guess Who's Back" track when his solo career had never really gone anywhere. Whatever, still a good song.

This is a pretty long disc, and they keep it going throughout. I always forget about "Feel It," one of the more random tracks at the end, but it's a good one. Everlast was a damn fine rapper, and his referential style is certainly one I enjoy. I still love it when he says "Gimme a break like Nell Carter."

Sadly, these guys (and this record) will be remembered by most people for "Jump Around," and that's a shame. There is so much more to enjoy on this album than just that ubiquitous single. So put on your shit kickers and kick some shit.

"Shamrocks and Shenanigans"
Posted by Wockenfuss at 11:01 PM

I have memories of you listening to this non-stop for about 2 years. Speaking of, I see that you got rid of the first Cypress Hill CD. What gives? And how do you not own a proper copy of Black Sunday, an album you listened to every morning for about 6 months of 1994? Oh how time has ravaged you.