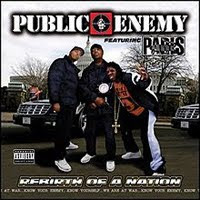 I bought this album on CD shortly after it was released, and then somehow managed to find a used copy of the vinyl last year. I'm not sure if I'd call this album underrated, because I get the vibe that the reviews were positive, but it may not get the appreciation it deserves. Of course, I'm a big-time Paris fan, so maybe my opinion is a little skewed. But I don't think so. I really just think this is just a pretty darn good group of songs

Hearing Paris, Public Enemy, and MC Ren all on one song (the badass opener, "Raw Shit") was something I never even considered, and the track, as random as the lineup is, delivers. Ren still has one of the coolest voices in rap, and when he gets serious, he sounds like he means it. I can dig that. But shit really gets bumping with the second cut, the electric guitar-heavy "Hard Rhymin'." This is where the collabo really starts to make sense: it sounds like Chuck D rapping over a classic Paris beat.

Flavor Flav goes buckwild on the fun-as-shit "They Call Me Flava" later on the record, and by that time, after hearing serious shit from Dead Prez and Professor Griff, it's a nice break. It's those same songs (much like any record that either of these artists have recorded in the past) that might turn some people off to this. The tracks are very pro-black (their words, not mine), very angry, and very serious.

But to me, the content often takes a backseat to sweet beats, hard-ass flows, and just really good songs. And I can't argue with that.

I rocked this pretty hard in '06. My undying loyalty to MC Ren knows no bounds. Hearing him with Paris and Chuck D. somehow manages to make him even cooler than he already is. Plus, the beats on this album are solid throughout. This is a solid political-minded hip-hop album. Quite the rarity these days.