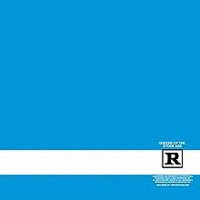 This is the record that introduced me to Queens of the Stone Age, and it'll probably always be my favorite. I've listened to it hundreds of times, and though I don't rock it as regularly as I did in years past, I never have any trouble coming back to it.

One of my friends turned me onto this record when it came out, bugging me to listen to it. He failed to mention that it was the guys from Kyuss, and I had yet to figure that out on my own. I thought the band name sounded sort of meat-headed, and the first time I heard "Feel Good Hit of the Summer," its only lyrics being "Nicotine, valium, Vicodin, marijuana, ecstasy and alcohol...c-c-c-cocaine!," I hated it. But when "The Lost Art of Keeping a Secret" kicked in, I changed my tune. And after the album sucked me in and took me over, "Feel Good Hit of the Summer" had a context, and it all made sense to me. And I loved it.

I remember reading an interview with Josh Homme about the recording of this record where he said he was inspired by the concept behind The Stooges' Fun House. There were only seven songs on that LP, but those songs were flawless. He wanted to do the same thing. Maybe there wouldn't be a ton of tracks on the album (there are 11 on Rated R) but each one would be worked on until it was perfect. (I'm totally paraphrasing a memory from a decade ago here, so this could be way off. But you get the point.)

The dude pulled it off. There's no fluff on this record. (Unless you want to count the horn loopage that closes out the record's final track, "I Think I Lost My Headache," but I'd still argue that that's not wasting space.) Every song is carefully structured, brilliantly sequenced in the LP's running order, and produced meticulously. And the variance in sound is staggering when compared to their first release. A song like "Better Living Through Chemistry," my favorite cut on Rated R, is proof positive of how far Homme and Nick Oliveri had come as musicians and songwriters. There's hand-drum percussion, like eight different parts, and sparse lyrics that are vaguely druggy but not in an over-the-top cornball way. It's just a fantastic song.

And while that acts as the core to this LP, it's just part of an incredible whole. Tracks like "Leg of Lamb," "Auto Pilot," and "In the Fade" (featuring a lead vocal assist from Mark Lanegan), are stellar, and all house completely unique vibes. Homme had clearly taken things to new level by this point, with any shyness he was previously harboring disappearing, never to show up again. And he was just getting started.

If you don't own this record, you are a sucker.

"Feel Good Hit of the Summer"
Posted by Wockenfuss at 11:11 PM