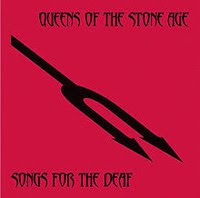 This album is a beast.

In my heart of hearts, I'll always be a Rated R man, but I enjoy the shit out of this record almost as much. If it weren't for the 60-minute running time and the radio DJ intermissions that don't accomplish much aside from interrupting the flow of the album, I think they'd be in a dead heat. But, it's not a competition. And when this thing came out, I listened to it a lot. Maybe not quite as much as Rated R, but pretty darn close. So it's safe to say I love it.

I was hotly anticipating the new Queens of the Stone Age record after my year-long obsession with their major-label debut, and when I heard that Dave Grohl was joining the band on drums, I got even more excited. This was still back when you didn't hear an album until you actually bough the CD and took it home, and I'm almost positive I bought this the day it came out. I still have my copy, the special edition (probably limited to a million) with the bonus DVD of live clips and band-shot studio footage.

I don't know why I get such a boner from watching Dave Grohl play drums with this band, but I really do get a rise out of it. I've gotta say: of all the incarnations of QOTSA, the combo of Homme, Oliveri, Grohl, and sometimes Lanegan is my all-time favorite. Watch this vid and tell me that seeing Grohl punish the bejeezus out of his drums isn't awe-inspiring. It's brutally sweet. The dude had been fronting Foo Fighters for a while at this point, and you can tell he was juiced up to be back behind the kit. Love it.

The band covers an insane amount of ground over the course of these 14 tracks, and the fact that a lot of folks consider this their signature album doesn't surprise me. In fact, I might agree that it represents their body of work better than any other single record in their catalog does. And Homme has never sounded sharper as a vocalist. On songs like "The Sky is Fallin'" and "Do it Again," he's a force, sounding both incredibly confident and able to match sounds with the ridiculously huge guitar.

Oliveri's vocal performances on this record are insane as well. Dude handles lead vox on four tracks, wails like a maniac, and adds an element of chaos to the album that neither Homme or Lanegan even bother to try to compete with. This would be the last Queens LP that Oliveri would appear on, and while I don't think the band has necessarily gotten worse since he left, the diversity that he brought as a vocalist and a songwriter is definitely missed. But that's the way it goes.

Really wish I would have bought this on vinyl the few times I saw it. Now I'm going to have to shell out 80 bucks on eBay at some point, and I'm not looking forward to that. But this is such a crazy-good record, that in a way, it'll be worth it.

"Go With the Flow"
Posted by Wockenfuss at 1:00 AM