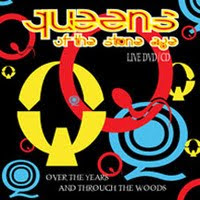 Ah, the sign that a band has really made it: the holiday-season live album. I know I got it for Christmas in 2005, and I couldn't have been happier. And while records like this are usually a shameless cash-grab (anyone remember Big Boi & Dre Present... Outkast?), this thing is so full of material that it's certainly well worth whatever the asking price was those six years ago.

Not only does this package include a 14-track, 75-minute live CD, but it also comes with a DVD that contains an almost two-hour, (very) pro-shot live show, as well as a ton of random bonus features that cover the band's entire career. So, yeah: in that regard, this wasn't something that was thrown together to capitalize on the band's hugeness at the time. Or, if it was, it was thrown together really, really well. Any fanboy would be happy to have this in their Queens collection, as I certainly was/am.

The main material, though all culled from one (or maybe two?) shows, finds the band playing stuff from all of their albums, and does a fine job of capturing the band at their beefiest: five, sometimes six members deep. They sound huge, and though I prefer a more raw Queens, these recordings are still very impressive, and the band sounds great.

The bonus features on the DVD contain live performances from years previous, most too grainy to ever be considered for inclusion on an official release, but perfect as add-ons here. Seeing the earliest version of the band do "Mexicola" and "The Bronze" at some outdoor show in front of like a hundred people is awesome. And the Rated R-era stuff is gold, too.

There's too much stuff on this thing to list, really. There's also a bunch of hidden features that I haven't even ever checked out, because by the time I watch the main feature, the bonus features, and listen to the CD, I'm Queensed out. But I might get to it soon. I'm enjoying it pretty hard right now.

Might be worth mentioning here that the only time I've seen Queens of the Stone Age live was right around this same time - actually about two months before this package was released. In September of 2005 I saw Nine Inch Nails at the Rose Garden in Portland, just so I could see Queens of the Stone Age, after many flubbed opportunities to see them previously. The venue wasn't ideal, but the band put on a great show. I remember Josh Homme saying, "Hey, we're Queens of the Stone Age and we're really fucking drunk." And then he proceeded to shred for like 55 minutes. Think he was wearing white boots, too, which I thought was stupid. Also, he clowned some guy in the crowd hard, making a joke about how the guy can't help but piss on his balls because his dick's so small. Or something like that. It was all very Rock & Roll.

And then Trent Reznor came out and I felt like a choad for being there.

My point: Queens of the Stone Age are a sweet live band, and this is an awesome representation of that.

"The Fun Machine Took a Shit and Died"
Posted by Wockenfuss at 10:03 PM