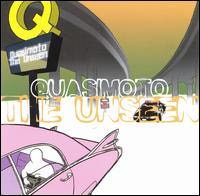 I have a random memory of my brother telling me, probably seven years ago, that our friend Matt Fargo wouldn't stop talking about this rapper called Quasimoto. That he was Matt's favorite rapper, and that he couldn't stop listening to him. Matt's tastes were mostly to be trusted, but though the name sounded familiar to me, I didn't think much of it.

A few years later I came across this CD in a used bin, remembered the second-hand recommendation, and scooped it up. When I heard Lord Quas, I wasn't too surprised that Fargo had dug it so much.

Madlib supposedly created the alter ego of Quasimoto (and this record) during a week-long 'shrooms binge, but stories like that, while cool to reference, are most often apocryphal. I've never met anyone who got anything accomplished while on mushrooms, let alone a 24-track LP that received notable critical acclaim. But this album is weird as shit, so who knows what street pharmaceuticals were consumed during its creation. And who cares.

Trying to explain what Quasimoto sounds like is a bit difficult, but "lo-fi, sample-heavy beats with helium vocals" is probably a start. Sound a bit precious? It kind of is, but it's mostly awesome. I didn't expect to enjoy this record much (I don't know what other Madlib stuff I've even heard), but it's held a spot on my iPod for years, and it's going to stay there. It's just so odd and unlike anything else I own, that I keep sticking with it. And as a whole, the record flows brilliantly.

It's probably not for everyone, but I've grown to love it.

Your recollection is accurate. This is, to date, the only rap album that Fargo has ever actively pushed on me. It makes sense if you think about it. For me, it's OK but I never really got what all the fuss was about.