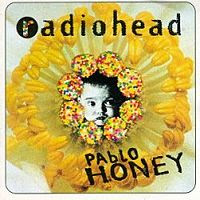 The revisionist history on Pablo Honey usually goes a couple different ways: Either people (the most loyal of fanboys) claim that it's way better than it is and lament its supreme underratedness, or people (ultimate cool guys) shit on it to the point where they don't even acknowledge it as part of the Radiohead catalog.

How much it pains people to admit that the post-Nirvana band of our generation is the same peroxide-blond, grunge-leaning group that scored big with "Creep"! Oh, come on. Who cares.

Radiohead must feel some serious solidarity with Beck, because in the mid-90's, society had written both of them off as one-hit wonders ten minutes into their career, after they had captured the hearts of a disaffected youth with self-deprecating anthems that the artists themselves hadn't even considered particularly strong songs. And then they both, somehow, managed to distance themselves from those ubiquitous tracks and go on to a huge career while never again reaching the masses in that same singular way ever again. Very few artists have done it. Very few would want to.

Along those same lines, Thom Yorke reminds me of Mike Patton in way. (Bear with me here.) Both dudes came out fairly young, scored big with a song with which they'll forever be inextricably linked, and both made some fashion choices that they probably lived to regret. They also both quickly acquired a fanbase of people who they never expected to relate to them, and after realizing what they had done, decided to pull an abrupt 180 and assume that anyone who was really down would follow them.

"Hey, remember that huge radio hit I had last year when my hair was all styled up? Yeah, well, I hate myself for doing that now, and it's led me to a dark, fucked-up place that has somehow turned me into a weird genius. Anyway, I'm writing some incredible songs now, but they sound nothing like that one that you and your friends used to sing along to. In a bit of what might turn out to be career suicide, I'm actually anticipating alienating half of our audience with this stuff. You probably won't like it, But if you do, you'll actually like it way more than that first shit I did, and you'll respect me more, and you'll buy everything else we put out until I die. And when I do, they're going to put the name of that first fucking song on my headstone, but you and I: we'll know the deal."

Too far with that? Possibly. Anyway.

The truth is, Pablo Honey is somewhere in between those two opposing viewpoints I mentioned in the beginning. People who say they can hear the genius of the band trying to poke through on this LP can go ahead and tell themselves that, but it's really not readily apparent. These are the songs that Radiohead had been working on since forming, and some of them are pretty darn good ("Stop Whispering," "You," "Prove Yourself"), and some of them are on the better side of OK ("Vegetable," "I Can't," "How Do You?"). It's almost like the band had to purge itself of all its early material to get to where they were going on their next album. And that's cool. Plenty of bands do that.

But not a lot of bands go on to make records like OK Computer and Kid A. And that's why it's too late for this record to get a fair shake. There's too much big shit that's happened after it. But it's a good record. Maybe a little dated-sounding, but good. And I've actually had a fun time listening to it the past couple days. And that's also good.

I got into Radiohead with OK Computer (which blew me away and still pretty much does) and have always felt slightly guilty for not thinking much of Pablo Honey. Like a true fan would have been there from the start and so not loving this album makes me less entitled to rave about OK Computer. But I've just never managed to like it all that much. I mean, it's alright.