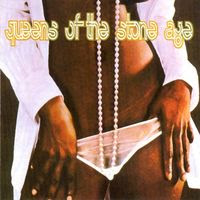 How cosmic that I would end up writing the entry for this album on the same day it was reissued. It's also probably the same day that my CD copy of this record went from being worth $40 on eBay to being worth a buck. This disc's been out of print for a long-ass time, and folks have been internet-clamoring for it for a while. Always thought about selling my copy, but my LP, like my Kyuss/QOTSA split, is a confirmed (yet nicely-made) bootleg, so I guess the thought of not having a legit copy left a bad taste in my mouth.

But that's me: I'm a Queens purist.

Truth be told, I don't mind owning two copies of this album, because it is awesome. Part Kyuss and part something totally brand-new, this record is riff-rock at its finest, even if the production value sludges some of it together in parts. Eh, it really doesn't matter. The bass and drums are huge, and Homme's songwriting is - while in retrospect not fully realized - badass. Tracks like "Mexicola" and "You Can't Quit Me Baby" are rumblers, with thick-ass basslines that lay the foundation for Homme's huge leads and oft-hypnotic noodling.

I bought this CD after hearing (and becoming obsessed with) 2000's Rated R, and honestly, I figured it'd be their "finding their sound" record. Instead, it's pretty much QOTSA right out the gate, with songs like "Regular John" and "You Would Know" sounding like the Queens of two years in the future.

I'm hoping now that this thing's being reissued that it'll get the respect it deserves. I don't think it's underrated, by any means; I just think a lot of people don't associate it with the band as much as their major-label stuff. And while that's understandable, it's a shame. Because while I don't think this record is quite as strong as Rated R, I wouldn't scoff at you if you told me you thought it was. If that makes sense.

I probably won't get the reissue, because I've got the bonus tracks on other releases, but who knows. If they put it out on vinyl, I might pick it up. As sweet as my red vinyl bootleg is, I hate that it's not legit. Yet I still have it... Huh.

"Give the Mule What He Wants"
Posted by Wockenfuss at 11:53 PM