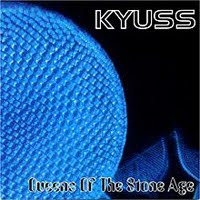 I've got this one filed under Queens of the Stone Age in my collection, so I guess that's why I'm writing it up here instead of having done it when we covered the few Kyuss albums I own. As you probably know, a few of the dudes from Kyuss (Josh Homme and Alfredo Hernández) formed Queens of the Stone Age after Kyuss broke up, and if there's ever been a transitional album, this would be it.

In fact, does anyone know of another album like this? Where the old band does a split with the new band that the main guy goes on to form, essentially ending the first band and beginning the new one? There's gotta be a few more, but I can't think of any.

This six-song EP features three tracks from each band, with Kyuss offering up two eight-minute bruisers (a cover of Black Sabbath's "Into the Void," and the original "Fatso Forgotso"), as well as a comparably ultra-brief, two-minute, fast-tempoed (for them) jam ("Fatso Forgotso Phase II") that closes out their side. While not their strongest songs, the tracks are vintage Kyuss: lo-fi, brutally dense, and aiming to pound your skull in.

The QOTSA side is, as far as I know, the earliest recorded work from the band. Homme, though not a veteran behind the mic at this point, sings pretty well (even though his vocals are buried in the mix) on the catchy opener, "If Only Everything," and even better on the more Kyuss-ish "Born to Hula," which is probably the best song on this disc. Both of these tracks would get re-recorded, with "If Only Everything" abbreviated to "If Only" and released on the band's self-titled debut, and "Born to Hula" redone sometime around Rated R, where it shows up as a b-side on a single. The later versions are probably technically "better," but these originals still hold up.

The Queens' side finishes up with "Spiders and Vinegaroons," a six-and-a-half minute clappy noodler that foreshadows some of the darker elements the band would eventually embrace and become known for. It's a badass song, but lengthy and vocal-less. Not that there's anything wrong with that.

I have this on CD and LP, though I think my CD is a 2000 reissue and I'm fairly certain my LP's a bootleg. So that kind of sucks. I was at the record store like, "Whoah! I didn't even know they put this out on vinyl!" That's because they didn't, idiot. I've learned to never make purchases like that without consulting my iPhone. Looks legit, though, so I don't really care.

Oh, and get ready for Queens of the Stone Age week!

The Descendents named their last album ALL before changing their name to ALL. The only difference between the two bands is their singer. And the fact that somehow the Descendents are still 10 times better than ALL. I know, it doesn't make any sense.