700th Post: My Record Collection Has Never Been So Stallionistic. 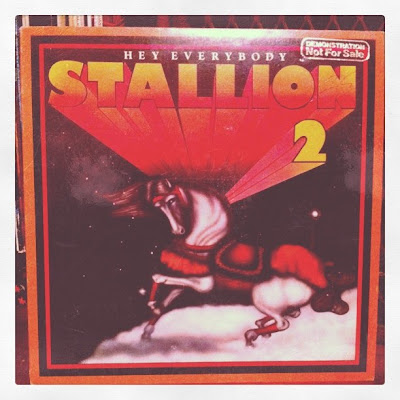 Before we get into the usual breakdown, I wanted to mention that I finally made it to Portland's sort-of-new 99 Cent Records today, after months of not making it happen. Among other gems (including Naughty By Nature's first LP), I found the Stallion record that you see up top there, which I've been on the lookout for ever since I found the first Stallion LP a few years ago.

Don't let the name fool you: not all of their records sell for 99 cents. But a lot of them do. The Stallion record cost me three bucks, which I was happy to pay. Anyway, just wanted to say that it's a cool place worth checking out, and the guy who runs it was super nice. I'll be going back soon.

Now, on to the stats!

The past and current numbers breakdown, as it relates to CDs vs. vinyl:

Since then, things have remained about the same, with vinyl gaining a little bit more, thanks to me replacing more of my CDs and going back and adjusting the entries. (Yes, I'm meticulous with this shit.)

I know that I own about 700 LPs, so we're still not even halfway done, even though the alphabet would suggest otherwise. The S's are going to take three months, methinks. Minimum.

Categories have remained basically the same, though 2000's hip hop has now over taken 2000's rock for the coveted third spot. And, we've got a new one: 2010's rock! Look for more from this decade in the future.

And thanks for reading again. You know how I have to take breaks from this thing here and there to reinvigorate myself. I'm feeling pretty good about it right now, so keep checking back. Now on to the Q's!
Posted by Wockenfuss at 10:38 PM

I love this blog. Just so you know.