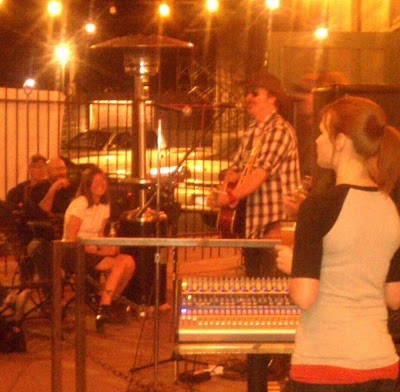 (Ed. note: This is Stallion Alert's first-ever guest post, provided by my brother/frequent commenter, Pocaroba. I sent him out on assignment, and hot damn: he delivered. My thanks to him, and I hope you nerds enjoy his Special Report, straight from Tucson, AZ, where they don't blink an eye at doing a patio show in March.)

I have been happily following the exploits of Eddie Spaghetti since I was a 13 year old who was obsessed with the NW music explosion that was happening around me in Oregon back in 1991. Back then he was the fearless leaders of the Supersuckers, the world's greatest rock n roll band (or whatever). Nowadays he seems to be splitting time between the Supersuckers and his more country-flavored solo work. It was this solo work that he brought to the Club Congress here in Tucson this past Friday night. I have been a fan of Spaghetti's for so long that he has entered into a rare stratosphere in my mind. Like Ice Cube or Mike Patton, Spaghetti will always be a supreme stallion to me, no matter what decisions he's made in his late career (like covering "Hey Ya"). Like the other aforementioned musicians, I'm just happy he's still making music. Now, to the show.

The wife and I arrived at about 6:45 in anticipation of the 7:00 start time. The Club Congress is an old hotel in downtown Tucson that has a stage, a couple restaurants and a patio area out back. Its claim to fame is that Dillinger hid out there at the height of his infamy. We sat in the outdoor portion of one of the restaurants since Eddie was going to be playing in the outdoor patio area. He was milling about and seemed to be catching up with old friends. I assumed this since Tucson is his hometown. The crowd seemed to be an odd mix. I was surprised by the sheer lack of fanboys. I only saw a couple of Supersucker shirts. A good portion of the crowd seemed to be in their late 40s-early 50s. There were parents there with their children, a small faction of buzzards, and some people that seemed to be there since they happened to be staying at the hotel. Altogether I would say that there were about 75 people there, not the crowd I was expecting for a free show in his hometown on a Friday. Whatever. I was still super stoked, especially when I realized that this was the first show I have been to in Tucson. It only took me four years.

As the night progressed it became apparent that the show was not going to start on time. After an hour and fifteen minutes, a couple of fancy cocktails (my Old Fashioned had a sphere of ice in it) Eddie finally took the "stage" at 8:00. He was accompanied by new Supersuckers guitarist "Metal" Marty Chandler and the duo kicked it off with some material from the new album. It sounded fine enough and made me feel better about my pre-arranged plan to buy his new vinyl. Eddie seemed in OK spirits but was not as chatty as I have seen him in the past and seemed to not really be all too thrilled to be in Tucson. The first non-solo song he played was "Roadworn and Weary," which he said his dad always tells him is the best song he's ever written. He also made sure to mention that his dad lived 20 minutes away but "I guess is too busy to come down and see his son play." Things like this and old cronies chatting him up earlier in the evening may have led to his less than outgoing attitude.

Later he played "Creepy Jackalope Eye," "Supersucker Drive-By Blues," and "Sail On," which he said was "the best divorce song that Nicole Richie's dad ever sang." So there you go. Later into the set he took a couple requests ("Sail On" was actually a request). I considered yelling out "17 Poles," my long-time favorite Supersuckers song, but resisted. I didn't think he would bust it out and besides, who am I to tell Eddie Spaghetti what to do? Literally five minutes after relaying this information to my wife he announced that he was going to play some Tucson-themed songs. He told the story behind "17 Poles," apparently past Houghton and 22nd Ave, and launched into 2 minutes of pure stallionism. I would kill for an acoustic version of that one. He then played "Going Back to Tucson," which if anything, must have been confusing for the less-knowledgeable members of the crowd. Here you are expecting a fun romp about partying in your home town and what you get is a depressing tune about "where it all went wrong." I dug it, though.

Close to the end he busted out perhaps my least favorite song of his, "Killer Weed" ("Breakin' Honey's Heart" gives it a run for it's money"). I have no problem with songs about weed (well okay, maybe I kind of do) but this tune has just never done it for me. He managed to get the crowd singing along which just further proves that I am in the minority when it comes to disliking cliched odes to weed. The night came to a close with the standard "Born With A Tail" closer. After four fancy cocktails (and some terrific fancy nachos) and an hour of Spaghetti, our evening out came to a close. I finished off the night by approaching the merch table, cash in hand, where the man himself was manning the table. He brought a dude with him who was selling stuff during the show but apparently he bailed the moment Eddie got done. Or something. Anyways, when we approached there was some lady talking to him, showing him texts or something on her phone, and all we heard him say was "it's water under the bridge." He looked clearly uncomfortable with the situation. Things like that would make me not really want to play in my hometown, too. I have never spoken to Eddie before and was a little surprised at just how nervous I got at the last second. I ended up being reduced to a fawning fanboy. As I was buying the record and a shirt with his face on it all I could get out was "17 Poles is like, my favorite song of yours. I'm like, so excited that you played it. Thank you for coming." And then I quickly retreated, ashamed at my lameness. The woman had not warmed him up and he was cordial but didn't really seem into talking. So yeah, I wimped out. Did I get a picture of me with him? An autograph? Of course not. That would have made too much sense.

All in all, it was a super fun night. It was solid mix of new songs and old and it was cool to see him in such a different environment, acoustic outside of a restaurant instead of all amped-up on a stage in a crowded club. I realized it was my wife's first time seeing him live when she asked questions like, "Why is he wearing his sunglasses at night?" and "What's up with the cha cha cha thing?" That's just part of the show, girl. Go with it.
Posted by Wockenfuss at 1:38 AM