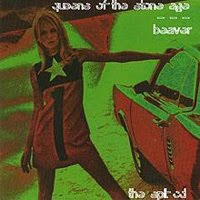 There's conflicting information on the web as to whether this came out before or after Queens of the Stone Age, and though I'm actually inclined to believe that it was released previous to their debut, I somehow didn't put that together yesterday, so it's here today. If it is chronologically off, it's not by much. So there you go.

I bought this around the same time (possibly even the same day) that I picked up up the Queens' debut, and I'm glad I did. This CD has become impossible to find, and since it's only got two QOTSA songs on it - with one of those being an instrumental - I wouldn't be looking to shell out serious dough for it. (The last copy I saw on eBay went for $60. Yikes.) But I do love having it. There's a 10" version that I would love to have more, but that thing's even more in demand. Collecting Queens of the Stone Age vinyl is an expensive habit. Check completed eBay listings sometime. It's nuts. But I'm getting off track here...

Not a ton to say about this one, though. The Queens songs are "The Bronze," a badass three-and-a-half minute rocker that would have fit in perfectly on their debut, and the wonderfully titled "These Aren't the Droids You're Looking For," a loopy instrumental that gets a little nutso in parts, but mostly sounds like a slightly refined jam. Cool song, though.

The two Beaver songs make nice companions for the Queens tracks, as they're equally thick and a little more sprawling.

Also: came across an article that was published today, featuring Josh Homme talking about what went into Queens of the Stone Age. Good read. Check it out.

"The Bronze"
Posted by Wockenfuss at 9:58 PM