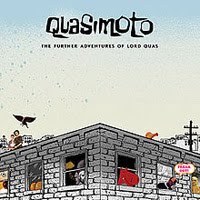 I found this CD used after getting deep into Quas's first one, and did not hesitate to give it a shot.

Though it was released five years after The Unseen, it basically picks up the flow of that one and keeps going, though the production quality seems to have increased a bit. The beats are still sample-heavy as all get-out, but the helium vocal style isn't quite as dominating a presence. But it's still there. This is another long-ass album, at 26 tracks and over an hour of music, and it's noticeably denser than his debut.

I don't know for a fact that stoners love Quasimoto, but it would shock me if they didn't. (Quas is a shameless weedhead: the song "Greenery" leaves no doubt about that.) These records are so random, so long, and so filled with off-the-wall chopped-up bits and pieces, that it strikes me as a bong-hitter's dream. And while that would often be an insult, in this case, it's a compliment. I've listened to this record many times, and I still hear new slices and dices when it comes through the shuffle on the iPod.

Speaking of that - and this is totally not worth mentioning but I'm doing it anyway - my iPod loves Quasimoto. You know how sometimes your iPod will just latch onto an album or an artist and seem to play them more than anything else in your library? My iPod serves up Lord Quas more than anything. And that actually ends up being cool, because as much as I love the dude's music, I've found that I prefer it in small doses: over an hour can be a bit taxing.

But don't let me dissuade you: if you come across any Quas on the cheap, I say go for it.

"Bullyshit"
Posted by Wockenfuss at 12:23 AM