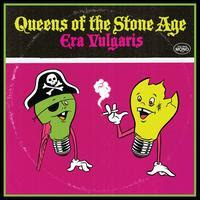 I have been revisiting the shit out of this record as of late, and realizing that maybe I didn't spend nearly enough time with it when it was released. Not only have I been repeatedly listening to the opening track, the incredibly awesome "Turnin' on the Screw," but I've been remembering why I thought "Sick Sick Sick" was such a sweet song when it came out.

Not sure when I sort of lost track of this one, but I definitely hadn't spent much time with it in the last couple years. I think at some point I had just oversaturated myself with Queens of the Stone Age, and I ended up taking an intentional break that lasted an unintentionally long time. This last week has been great, because I've been getting back in touch with all their music, but this record has been the one that's hit me the hardest.

Probably makes sense because it's the most recent one and the one that I've obsessed over the least, but damn: this one is a go-getter. The 47-minute running time doesn't hurt. The band was getting really expansive in their couple LPs before this one, and while that was cool, they were lengthy. This one's 11 tracks (12 on the vinyl version, with the bonus cut "Running Joke" thrown in right in the middle), and just a lot easier to play and replay.

There's more finesse in these tracks than simply full-on pummeling rock, and it really works. Songs like "Make it Wit Chu" and "Suture Up Your Future" are very un-Queens, but they're cool. "Into the Hollow" is a song that I had forgotten about, and I don't know how. Same with "Misfit Love." both awesome. And both weird. This whole thing's weird. "I'm Designer" is flat-out bizarre, at least for QOTSA.

To go along with that oddness, the band issued this album on triple 10", which is one of the sweetest moves ever. There's only two songs on each side of the records, so it makes listening to it a real workout, but it's one of the cooler packages I own and, as corny as it sounds, the format gets you really involved with the songs, which I like.

All this Queens has gotten me excited for their new record, which I think they're recording right now. Bring it. But for now, we move to the R's.

"Misfit Love"
Posted by Wockenfuss at 1:38 AM