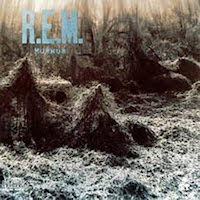 When it comes to albums I own just because I feel like I should, R.E.M.'s Murmur is right up there with Neutral Milk Hotel's In the Aeroplane Over the Sea. I'm not overly fond of either of them, but I like the records well enough, and they have been so critically knob-slobbed that I apparently developed a need to own them to further legitimize my cool-guy cred.

I'm sure I have other records like this, but I can't think of them right now. Honestly, I try my best to not fall prey to this sort of bullshit, because I hate the idea of liking something because I feel like I should. (It's currently the reason I have never listened to a Kanye West record. Well, one of many reasons.) And with this record (and the Neutral Milk Hotel one), it's not like I don't like it. I do. I just don't think I love it in the way that some people do, and maybe that's what interests me. I really do enjoy Murmur, but I've been waiting for that "holy-fucking-shit-this-is-brilliant" moment to click with me for 20 years, and I don't think it's going to happen. And that's fine.

When I was a teenager, there were a handful of records that would always show up in magazines like Spin and Request as the Greatest Rock Albums of All Time. Or maybe it was "most important" or something. Whatever it was, it wasn't a list that included the Beatles or anything like that. It was an alt-leaning list that usually listed London Calling at the top, and also mentioned Never Mind the Bollocks, The Feelies' Crazy Rhythms, Television's Marquee Moon, maybe the first Velvet Underground record, possibly It Takes a Nation of Millions to Hold Us Back, and almost always, Murmur.

Before I even heard that record, I had heard R.E.M., but their critically-acclaimed past was really intriguing to me. Maybe it was that boggy, washed-out cover, or maybe it was just that this record kept popping up as a revolutionary moment in music, according to many magazines that I trusted. I think I finally found a used cassette copy of it when I was a teenager, and, like I said, it was underwhelming to me. Possibly too jangly for my hormone-heavy teenage mind. No idea when I got this CD.

I went through a little R.E.M. phase around the "Losing My Religion" era (yeah, I still have my "Shiny Happy People" cassette single, what about it?), but it never stuck. And, not to sound like the ultimate predictable music cock, but I can't stand any of their stuff from the last 20 or so years. This record, the Chronic Town EP, and about half of Document was about as far as I took it. Pretty sure that's as far as I'm ever going to take it.