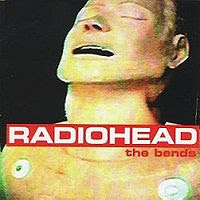 A band releasing a sophomore album superior to their debut isn't that uncommon, but a band surpassing their debut by the margin that Radiohead did is pretty rare. The Bends is not only a great record, it's an important record, and one that would take the majority of the world a few years to catch up with. That included me.

I have a vague memory of being somewhere (a relative's house or something?) in 1995 and seeing the video for "Fake Plastic Trees" and not feeling much other than, "Huh, they're still at it, eh?" At the time, I wasn't really in a space to be handling what Radiohead was offering, but even if I was, I don't know that it would have really reached me. I know the videos for "Just" and "High and Dry" also got some minor MTV play, but I don't remember seeing them. Honestly, it wasn't until I embraced OK Computer that I went back and bought The Bends and listened to it incessantly for like two years.

And this is the kind of record that you can do that with. From beginning to end, this LP is brilliant, with almost every track sounding like it could be a single. Seems like about half of them were, in fact. And while the band clearly had experience with making songs that hit the mainstream hard, they had never made songs with this much complexity, vigor, and warmth.

From the opening wind-blown swirl that begins the album and "Planet Telex," you can tell this is the work of a band with something to prove. People want to read too much into Yorke's supposed depression-based lyrics on this album, but honestly, a lot of the lyrics here could be interpreted in a ton of different ways. And for me, while I certainly think Radiohead's lyrics are an integral part of the band's approach, I also think melody and arrangement are the forces that drive their songs and really make them powerful. "Fake Plastic Trees" and "Just" are so smart and precise in this regard, it's staggering. Same with the closer, "Street Spirit (Fade Out)," which is layered so smoothly that you can listen to dozens of times before hearing every element at work.

Some folks probably put this record and OK Computer on the same level, and though I probably give the edge to OK Computer, there's a great argument to be made for this record being equally great, and equally important. It's not often you see a band make so much progress in such a short period of time, in such a complete way. Not a stinker on this thing. And that title track: man, that's a good song. But now I'm rambling.

I somehow have an original import Parlaphone pressing of this album, which I think I bought from a friend or something...? Anyway, it's a sweet copy and it sounds incredible. So don't touch it.