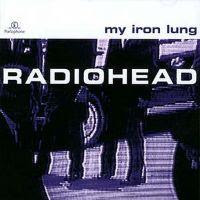 If you're looking for the bridge that spans the gap between "Creep"-era Radiohead and "Fake Plastic Trees"-era Radiohead, this is it. And I mean that literally - it was released between Pablo Honey and The Bends. But, it's also the first place where you hear things starting to get noticeably abstract, with both Thom Yorke and Jonny Greenwood stepping up their respective games considerably.

Yorke's lyrics weren't exactly shitty on Pablo Honey, but some of them were less than memorable - ironic considering they probably represent the most easily decipherable words he would ever sing. His mumbly slur starts to take hold on this EP, but along with it, the ambition in his words takes some real leaps forward. And when he sings, "This, this is our new song/ Just like the last one/ A total waste of time," on the title track, you can tell he's all pissy about their "Creep"-induced rise to stardom, and that sort of harnessed anger might just be what makes this EP such an interesting group of songs.

It also might be because Jonny Greenwood is auditioning a bunch of new sounds and styles with his guitar on these tracks, and though not all of them totally hit it out of the park, it's really cool to hear him going nutso in a variety of ways. "The Trickster" features a much more jagged guitar approach than anything from their debut, and the rest of the band sounds energized as a result. "Lewis (Mistreated)" is one of their more punky songs, with Greenwood's guitar sounding glassy, sharp, and confrontational. "Punchdrunk Lovesick Singalong" is more tonally precise, hinting at some of the larger-scope songs the band had yet to write, where atmospherics and mood took precedence over slamming melodies into the listener's head.

"Lozenge of Love" and "You Never Wash Up After Yourself," two short, acoustic songs that don't seem to feature much more than Greenwood and Yorke, wrap up the album proper, and offer a rare glimpse into a stripped-down version of the band. The inclusion of the acoustic version of "Creep" on the end of this EP just reeks of record company interference, but I'm not basing that on anything other than the fact that everything else about this EP seems to point toward a deliberate shift away from that song and everything it represented. Also weird considering that it was already available on the "Stop Whispering" single. But this would mark the last time the song and the band would be connected for a while.

A nice little EP, but ultimately only a tease of what they would come up with next. And the title track is an incredible song. Think I forgot to mention that.