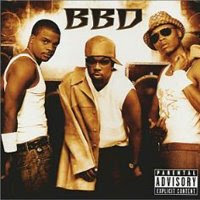 Sometimes a joke gift from your brother looks so good on your shelf that you just can't bring yourself to remove it. So it goes with this, Bell Biv Devoe's 2001 attempt at reigniting their fire that burned so bright more than a decade before. Sure, there was Hootie Mack in '93, but we all know they peaked in '90 with Poison. And with the way the musical landscape changed in the early 90's, BBD didn't have a chance by '93. So, they went their separate ways and then came back with this banger, which I'm sure no one remembers.

In the interest of full disclosure, I should mention that my brother didn't buy me this record out of some random attempt at Christmas hilarity (although it did provide a good amount of that). Far from it. In 1990 I was all about Bell Biv Devoe. We both were. This was pre-grunge, pre-high school, pre-facial hair. It was an awkward time for me, and for music. But it was a perfect time for BBD. Their mix of R&B and hip hop took what it wanted from New Jack Swing and just "oohed" and "ahhed" over the rest, all while wearing some really, really bad clothes. (Seriously, have you watched the "Do Me" video recently? I can't explain how incredibly uncool that all was like six months later.) But, at the time, it was huge. "Poison" was big time, a song that was both club ready and radio friendly, and managed to be dirty without being filthy. And who else would have told us that "you never trust a big butt and a smile"? Sage advice.

But, like I said, things changed drastically, and BBD got lost in the shuffle completely. And unfortunately, they're the kind of group that is so associated with one time period and one or two songs that they have absolutely zero chance of ever making a successful comeback record. It's just never going to be cool to listen to Bell Biv Devoe again. But try to tell them that.

The funny thing about this record is that it's really not bad. It's ultimately innocuous and fairly generic, but I can think of plenty of things I'd want to hear less. The BBD boys go hip hop hard on this one, and though Biv is the only member to ever prove his rap skills previously, the other two bring it on this one. Sure, they're not that good, but it could be much worse. We know they can sing, and they do plenty of that as well, with Ricky Bell just beating some hooks to a bloody pulp. The production's solid as well, nothing earth-shattering, but if you heard it on the radio you wouldn't think twice. So, what's the problem?

The lyrics. Oh, the lyrics. With song titles like "Dance Bitch" and "Da Hot Shit (Aight)" you really can't expect much. And you shouldn't. But, it's nice to see some things never change: these guys still really, really want to fuck you. Check this gem from "Shorty Gone Get It": "Lick your nips while you're ridin' it/ Pick you up, get rough and shit." Yowsa. The gloves are off, and it's uncomfortable. But, you can't fault 'em for trying.

Now I'm going to go see if I can find my cassette copy of WBBD-Bootcity! The Remix Album.

"Shorty Gone Get It"