The Disposable Heroes of Hiphoprisy - Hypocrisy Is the Greatest Luxury (CD, 1992) 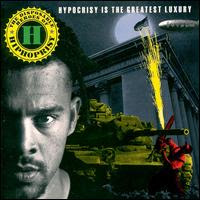 This is another one of those discs that I always wanted to buy when I was a teenager, but never got around to picking up till about 15 years later.

I've been listening to it on and off for the last year, always wondering what I would have thought had I owned it when I was 16. Well, first, here's the deal with the Heroes: Michael Franti, who everyone mostly knows from Spearhead, fronted this group which, as you can probably tell, has some statements to make. Nothing wrong with that. Labeling the music as strictly hip hop wouldn't be completely accurate, because Franti isn't a rapper in the traditional sense, and the beats aren't typical hip hop, especially by 1992 standards. The music is dense and drum heavy, and it seems to be a mix of samples and actual players.

Franti often comes off as a more laid back Chuck D, choosing a spoken word approach to convey his concerns, of which he has many. It's cool for a while, but when you listen to three six minute-plus songs in a row, all describing how fucked up the nation is, it can get tedious. Franti is compelling in what he says, but his ability to gel with the tracks is sometimes questionable.

This is a great example of one of those records that's always going to be a darling with the critics (that's what initially piqued my interest in '92), but will have a problem connecting with a wide audience because there's rarely a break from the deadly serious subject matter. And songs like the slow and repetitive (and eight minute long) "The Winter of the Long Hot Summer" are hard to get with. It's well done, but at some point you have to draw the overkill line.

Would I have told people I loved it? You bet I would have.

"Language of Violence"
Posted by Wockenfuss at 11:08 PM