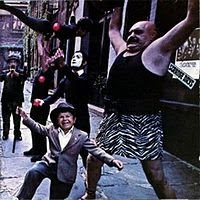 Ah, the days when a band would release their sophomore album nine months after their debut. Truly a great time to have been a music fan. Or so I imagine.

Though this album contains song that didn't make the cut on the first one, it's by no means a glorified b-sides compilation rushed out to capitalize on the success of "Light My Fire." Strange Days is an album unto itself, and quite a good one. It makes for a great companion to their debut, a sort of extended introduction to the band. Let's break 'er down:

"Strange Days" is the group at their most psychedelic, one of the only songs that features their instruments muddying together and not really working as separate, distinct parts. It sounds a little crowded as a result, but the lyrics are great and it's a good one to kick the album off with.

"You're Lost Little Girl" is a sullen and ostensibly sensitive song, though Morrison's lyrics seem almost sarcastic in a way. Maybe that's just me being pessimistic. Krieger's guitar solo is fantastic.

I always forget that "Love Me Two Times" is from this record. For some reason I always picture it being later in their career. This is a fine song, though not one of my favorites in the Doors catalog. Maybe I've heard it too many times. Or maybe the lyrics seem a bit trite to me. Odd for its very bass-y sounding bass.

"Unhappy Girl" is easily the Doors' album track that I've listened to the least in my life. It never made it onto any random collections or best-ofs (which I hit pretty hard in my youth), and it's one of those songs that is so short and so unmemorable that I guess it just got lost in the shuffle for me. The only song of theirs I can say that about, and the only song on this record that does sound like a b-side.

"Horse Latitudes" is awesome just for how bold it was for them to record it and put it on an album in the first place. It's short enough to not seem intrusive, and whatever they did to get those sounds is pretty sweet. The screams at the end that fade out are still enough to creep me out.

"Moonlight Drive" will always be remembered as the song Morrison sang to Manzarek on the beach that one fateful afternoon, but it should also be praised for being a great pop song with bizarre lyrics that meld perfectly with the eeriness of Krieger's slide guitar. I have always really loved this track.

"People Are Strange" keeps with the "strange" theme of the album, I suppose, and my only beef with it has always been that it's too short. It's a great song with a really striking melody, and I always thought they should have drawn it out a little bit more. At just over two minutes, it comes and goes really quick. Oh, how a teenage boy can convince himself he identifies with these lyrics perfectly...

"My Eyes Have Seen You" reminds me a bit of some of the more lackluster tracks on the first record, but when it picks up steam, it becomes a strangely forceful little number. Listen to it on headphones and you can really hear how much weird shit Krieger it doing to add depth to the relatively simple verses.

"I Can't See Your Face In My Mind" has always been a great Doors mixtape song for me, and I think it still would be. The meaning of the song is a little hazy, the lyrics get dark and then nicely confusing, and Morrison sounds sublimely tired during the whole thing. Great song that wouldn't have worked as well on any other album.

"When the Music's Over" always get compared to "The End," and while they're similar in length and their middle sections both have what seems to be stretched sections of Morrison free-wheeling it, the songs are quite different. This one is much brighter from the beginning, and it maintains a somewhat celebratory (or at least revolutionary) air throughout. The build-up in the middle ("We want the world...") is semi-legendary, and with good reason. This was expanded in their live sets, and the anticipation that it brought out of the crowd was something that was filled with a great sort of nervousness. And, if you need a song to close a set with, this is a good one. I've never had a problem listening to this one all the way through, as it is filled with wisely placed peaks and valleys that make sure the song keeps moving.

So, yes, another great one. I always love listening to the Doors in headphones. Their early recordings utilize very few tracks, and it's fun to hear what each one of them is doing.