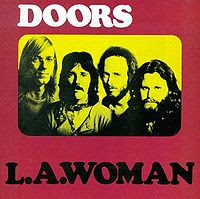 The Doors' final studio album with Jim Morrison is a solid one, though, like The Soft Parade, it stands out as veering off the beaten path of the instantly recognizable "Doors Sound." It sounds a little like Morrison Hotel, but even more bluesy, and the absence of Paul Rothchild as producer means the music just sounds different. Bottom line: songs from this record fit in a lot better on classic rock radio than most of their previous output.

"The Changeling" is, other than maybe the title track, the best song on this record, and I've never been able to decide if they were wise to put it first or if they were dumb to blow their load so early on. I can't deny that it's a great opener, a fast song with Morrison sounding enthused (though his voice sounds deep and ravaged throughout most of the record), and well he should be. This is a sweet, and somehow not incredibly popular Doors song.

"Love Her Madly" is a fine song, and it's this track specifically that I should point to when talking about The Doors being played on classic rock radio. This one's a staple. The piano's catchy, the song is succinct, but Morrison sounds positively bored throughout and I sort of lost interest in it at some point. But, if it's worth anything, I used to love it.

"Been Down So Long" is a chugging and charging blues number, notable only because it's too long and Morrison sounds like absolute shit on it. I hate to say it, but I have a really low tolerance for the "I'm an old blues man" dickery he wallowed in towards the end of his life. It's self-indulgent and obvious, especially coming from a guy who wrote such great lyrics. Doing it live is one thing, taking up 15 minutes of a record with it is lazy.

"Cars Hiss By My Window" - see above.

"L.A. Woman" is one of the last truly great Doors songs, a sprawling ode to the city that shows Morrison still had plenty left in him (making the above songs even more frustrating). Clocking in at almost eight minutes, this track has never felt long to me, and that's a sure sign of a great song. The "Mr. Mojo Risin'" thing might be a little too much for some people, and I get that, but I think it's pretty sweet. Also sweet: "Motel, money, murder madness/ Let's turn the mood from glad to sadness."

"L'america" still strikes me as the single weirdest Doors song. As a Doors-obsessed teen, it took me a long time to get on board with this one. Once I did, I loved it. Still do. But the composition is initially jarring, as it sounds backwards or something. L'america was a running theme in some of Morrison's poetry, but I can't remember much about the significance. Morrison sounds fucking sweet on this song.

"Hyacinth House" is a much-needed breather from the rock, a simple but really beautiful song that is sad in retrospect, but you never know how much of the words were autobiographical. I always forget how much I love this song, but when I hear it, it comes right back to me. I listened to the shit out of this one when I was 14.

"Crawling King Snake" is not only another blues number, but a cover, even, and it stands alone as the worst and most unnecessary Doors album track.

"The WASP (Texas Radio and the Big Beat)" is another song, like the title track, that features Morrison getting hit shit together and making the track really work. Once this one gets going (after the spoken word section), it is really damn good.

"Riders on the Storm" wouldn't be my choice for the last song on the last Doors album, but it certainly works. I've grown a little weary of this one over the years, but I can readily admit that the haunting melody and the rain/thunder thing are both fantastic. And at least Morrison goes out sounding like himself, with some great lyrics. "His brain is squirming like a toad" is a great, great line.

Not my favorite Doors album by any means, but this one still sticks with me through the years. I just skip the blues numbers because I'm lame like that.

"Hyacinth House"
Posted by Wockenfuss at 1:24 AM