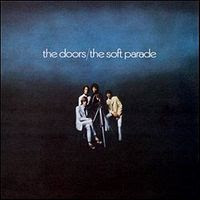 Definitely the oddball in The Doors' catalog, this record is a diversion for a few reasons: First, the arrangements are noticeably larger, with horns and strings playing a big part in the majority of the tracks. Second, Morrison's songwriting credits are fewer here than on any other record, with Krieger stepping up and delivering some really strong numbers.

So, you would think the album might be uneven and, given Krieger's past output, a bit sappy. Not the case. This is a divisive record for sure, with many people not agreeing with the switch from the group's signature sound. I find it incredibly compelling, a record that should stand alone, proudly, as some of The Doors' more experimental material, as well as providing some of their most memorable songs. Here we go:

"Tell All the People" makes it clear right off the bat: this is not The Doors you have come to know and love. The horns are big, the progression is very Manzarek-less (though you can hear his piano), and Morrison is aided by big background vocals for the first time. Compared to their previous work, this sounds absolutely huge. For me, it works.

"Touch Me" has never been one of my favorite Doors songs. I don't really care for the lyrics, and the arrangement is almost too much on this one. You can see what they were going for, and they nailed it, but the lyrics are some of the most cliched ones in the history of the band. Knowing that is was originally titled "Hit Me" makes it a little more interesting, but not much.

"Shaman's Blues" is the first Morrison composition on the record, and the musicians are pared down considerably from the first two tracks. It's got a terrific haunting groove, and lyrics that work perfectly with the vibe of the song. Morrison's ad-libs at the end are also a lot of fun ("Optical promise" was always a favorite of mine).

"Do It" is the one song on the record credited to both Morrison and Krieger, and it does sound like a solid mix of the two. The song is dark but intricate with the changes, and the lyrics, while fairly simple, seems to have some sort of ulterior motives that add some mystery to the song. It couples nicely with "Shaman's Blues."

"Easy Ride" was a song that I initially hated when I was young. It sounded like The Doors at a ho-down, and I hated to hear this peppy and jangly side of them. I've learned to love the song, especially the lyrics. This is Morrison in juxtaposition mode, singing about masks and black polished stone, over a standard country-ish groove. It's a lot cooler than I ever gave it credit for.

"Wild Child" is back to the pure Doors sound, seeming like it was left over from their previous record. This is ragged Morrison, sounding probably drunk and mostly crazy. He speaks softly in the bridge and then absolutely yelps at the end. It's a good one.

"Runnin' Blue" is, other than the undeniable title track, probably my favorite song on this record. The chorus is a little flighty, but it has some of the most powerful verse sections they ever laid down. And Krieger's guitar work, though overshadowed a bit by the wild sax, is fucking sweet. And, clearly, it's an ode to Otis Redding, which is doubly sweet.

"Wishful, Sinful" reminds me a lot of "Yes, The River Knows," though it's even more over the top, and even better. The buildup in this song is constructed perfectly, and when it peaks, the chorus really works, even though Morrison sounds noticeably haggard in sections. They really open up the arrangement on this one, so it can be a lot to handle, but I like it. It just sounds very Soft Parade.

"The Soft Parade" is a beast, a song that jumps between tempos and styles while still maintaining a cohesive feel. To me, this is Morrison close to his peak, lyrically and melodically. There is no other way this record could have been closed as effectively. When he sings the "Welcome to the Soft Parade" lyric in the middle of this track, it gives me the good shivers. And I always thought the "Successful hills are here to stay" was a great line.

This was, for a long time, my favorite Doors record. But, when it comes down to it, I think I have to give it up to the next one...

"The Soft Parade"
Posted by Wockenfuss at 4:10 AM