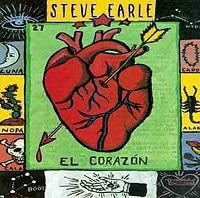 Full disclosure: this is the only Steve Earle album I own (not counting the split EP he did with the Supersuckers), and I bought it because I am an obsessive Supersuckers completist and they play on track eight, "NYC." This is sad, because I really like Steve Earle. I have a bunch of his tracks on soundtracks and compilations, but I just have never taken the dive and fully immersed myself in his catalog. I plan to, I just haven't come to it yet.

Anywho. I won't go through the long and torrid tale of Earle's career, but this album was recorded after he kicked heroin and decided to become a really fucking important songwriter. (I mean that sincerely.) Earle reminds me of Bruce Springsteen in a lot of ways, except that I like Earle a lot better and feel like if they were having a deep political discussion, Earle would kick his ass with endless references to specific events.

This record begins and ends with haunting acoustic numbers (the a-bit-too-long "Christmas In Washington" and the string-aided "Fort Worth Blues," respectively), but mostly rocks in the in between. Earle's country roots are still with him, but it's the old side of country, not the new-country he flaunted in the 80's. Songs like "I Still Carry You Around" and especially "The Other Side of Town" sound like they could be 50 years old. And they're both really great songs.

The song with the Supersuckers is my favorite on this one, but that could simply be because I've heard it the most, or because the Supersuckers wall-of-guitar sound is easily identifiable and sweet to hear with Earle's vocals. Plus, the melody is catchy as shit, and the lyrics are dour but sung with an uplifting conviction that betrays (what I interpret to be) the intended tale of naivety behind the song.