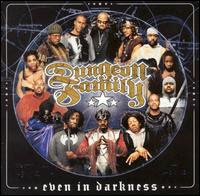 I don't know about anyone else, but I was pleasantly surprised these guys actually got their shit together to do this record. Not because they're lazy or incapable, but because there's a ton of 'em. The fact that's it's really, really good is just the icing on the ol' cake.

The beats here are a good mix of the kind of stuff you'd expect to hear on a Goodie Mob or Outkast record. They're not throwaways, either. This is prime shit, and this record is far from some one-off hoping to capitalize on the popularity of the 'Kast. These are hard beats and rough rhymes, with posse cuts galore. No weak links, nobody phoning it in. Some strong shit.

"Crooked Booty" is a great song, but when "Follow the Light" kicks in, you know you're in for it. How that song wasn't a huge hit, I'll never know. Big Boi slays his verse as usual, and Cee-Lo once again reminds us that he's just as strong when he's rapping as he is when he's singing. (I actually like him better when he's rapping.) I think "Trans DF Express" was the single, which strikes me as bit of an odd choice. It's a great song, but not as immediately catchy as "Follow the Light." Still, strong.

One of the other real gems here is "6 Minutes (Dungeon Family It's On)," a track that runs about nine rappers deep and reminds us, as if we needed it, that Big Boi is a pure bred stallion:

"HOT tub.. Bubbling like warm water call me, HOT tub
Cut your wife and daughter like a meat cleaver
We be the, Dungeon Family
Niggaz up under the step from A-T-L to overstand me
D-F, is the clique that I represent
Puffin purple, poppin poppers, spittin straight pimp shit"

We don't have to talk about Bubba Sparxxx being on this thing, do we? No?

"Trans DF Express"
Posted by Wockenfuss at 3:06 AM