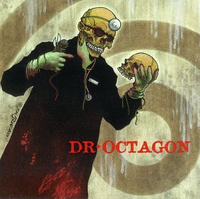 Kool Keith is a nut job.

Lucky for him, it's all a widely accepted part of his charm. Otherwise, phrases like "rectal rebuilding" and "space doo doo pistols" might seem rather off-putting. In this case, and as is often the case, it's all being spit out of the mouth of an alter ego, so it's not really like it's Keith saying it anyway - it's Dr. Octagon. I can't remember the entire back story (it's been a while since I listened to this one), but I think he's some sort of interplanetary obstetrician. You know, your run of the mill rap shit.

If the premise sounds iffy, it should. Ostensibly, it's a pretty retarded idea. The beauty of this record is the amount of sheer lyricism that Keith pulls out of the woodwork for the subject matter. That, and Dan the Automator's swizzity beats. Kool Keith is all over the map, stringing non sequiturs together at some points, telling linear stories in others.

It's madness, but it's also strangely compelling. This is my favorite Kool Keith record, but there's a bunch I haven't heard. So really, I don't know what I'm talking about.

But I do know this is some spaced-out dope shit.

"Blue Flowers"
Posted by Wockenfuss at 2:36 AM