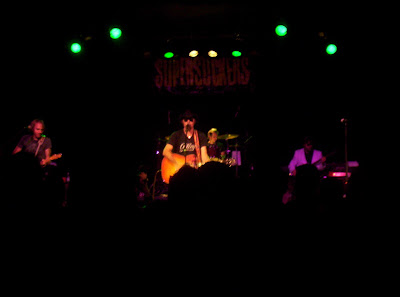 A few more notes on the Supersuckers show this last Saturday, and some addressing of Biff's comments:

The origins of "Seventeen Poles": Eddie prefaced the song by saying roughly this: When they were teenagers in Tucson, there was a party spot they would go to. It was on the outskirts of the East side of town, and once they passed a certain intersection, they would count seventeen telephone poles, then hang a left. This was where they did their drinkin'.

Mention of Dancing Eagle: None. Eddie did, however, mention at one point that Ron had been "in and out of the band a couple times." Not surprising: no mention of Mr. Rick Sims.

Other notable banter by Eddie: He mentioned a few times that it only took them twenty years to sell out the Showbox, and he punctuated that thought by saying that they told him he couldn't do it this time around, and he proved 'em wrong. A nice little victory for the band, no matter how long it took, I suppose. He seemed happy as shit about it. If we know anything, we know that Eddie enjoys the adoration of the crowd, and he was basking in it.

In possibly the most sincere moment in the onstage history of the band, Eddie paused towards the end of the show and gave a warm thank you to the band, who he said had literally given him his life, his family, and everything he has. Bolton gave a sarcastic "Aw, shucks," which effectively killed the moment. Eddie then thanked the fans humbly before they got back to business.

Early in the set, he said that to the best of their recollection, their first practice was in December of '88, which made this an almost precise 20th anniversary. Being a fan of accuracy, I thought this was pretty sweet.

Belligerent screaming requests for "Dead Homiez" by me: Sadly, none. Though I did hold up a middle finger during "Born With A Tail," which I haven't done since '01.

Typical shirtless moshing drunk dipshit rookie Supersuckers fan quotient: High, but I've seen higher. I only spotted one asshole with his shirt off, and I only got slammed into hard about three times. I did, however, get hit in the head with a hat that was flung into the air by a slam-dancing choadwad. I also almost got hit with a drumstick thrown by Zeke's fat shitty drummer. I dodged it, while also trying to make it crystal clear that I was not the least bit interested in catching it. Kept my arms folded.

Eddie's resemblance to James Hetfield: How dare you.

"Tasty Greens"
Posted by Wockenfuss at 2:22 AM