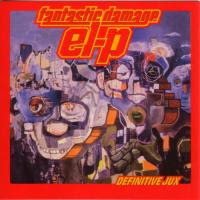 I completely missed the boat on Company Flow, and I was OK with that. Still am. I find El-P's solo stuff a lot more interesting, even though that might be because I am still unsure of his appeal. I like his stuff. I don't love it, but I do get a kick out of the intricacies he's able to pack into an album.

I don't know this record super well, but I listened to it quite a bit when I first got it. I can see why people like it, I can see why people don't. The beats are initially abrasive, but once you listen to a few songs and realize that this is how it's supposed to sound (distortion-heavy lo-fi techniques, etc,), there's some cool shit to be found.

Whether his lyrics make any sense is up for debate. I don't really give a shit to study them. They sound cool, and the more sci-fi and otherworldly he gets, the more it adds to the density and spaced-out madness of the music. "Deep Space 9mm" on this album is a perfect example, and it's one of my favorite songs on here.

I have to be in the right mood for this one, because it tends to make me uneasy. That's not always a bad thing. In fact, most records can't do that. So that's something.