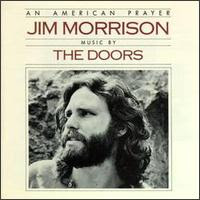 I was stupid to not have purchased this in its original version when I was really into The Doors, because I would have loved it. As it is, I have the extended version, many years past my Doors prime. It's 23 tracks of Morrison's poetry, Doors music from both the Morrison and post-Morrison eras, and it's a lot to take in.

For hardcore fans, it's a good one. For the casual listener, there's going to be plenty of filler. It's really a weird mix: chopped up versions of previously released Door songs with added material, audio from Morrison's bizarre HWY film, and a strangely placed live version of "Roadhouse Blues."

Some of the better tracks ended up being used in Oliver Stone's The Doors film, and they worked really well. "Ghost Song" is one of these, and if you can get past the disco-y sound of the backing track, it flows really well. Same with "A Feast of Friends." But some of it is awkward and forced, almost working but not quite getting there.

It also stinks a bit of the surviving Doors sucking the last little bit they could get out of Morrison, which is problematic. As with any posthumous recording, the source material is varied, and it leaves a lot of the songs sounding choppy. It's also clear there was extensive editing of a lot of the spoken stuff, and you start to wonder if it's been cheapened a bit by the whole process. Like I said, as a youngster, I would have loved this. Any insight into the inner workings of Jim Morrison, and any unreleased material of his would have been intriguing to me. As I listen to it now, I still find it interesting, but the flow of the thing seems iffy, and hearing the surviving members recreating a section of "The End" for "Hour for Magic" just strikes me as lame.

It's a fine line: hardcore fans might eat it up, but purists might have some serious qualms with it. I'm still on the fence, I guess.

"Lament"
Posted by Wockenfuss at 1:30 AM